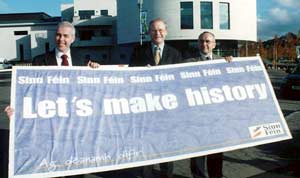 Sinn Féin candidate in the forthcoming Assembly elections Paul Butler said he has been receiving positive responses from voters in the Lagan Valley constituency in the run up to the 26 November elections.

"We will definitely increase the Sinn Féin vote and are growing in confidence with every canvass we undertake," he enthused. "The Sinn Féin man pointed out that in the last elections, up to 20,000 of the total electorate did not vote. "From that point of view, I am calling on nationalist voters to come out to vote, to make sure their vote counts and return a Sinn Fein representative," he said.

Butler told An Phoblacht that the unionist Assembly members will not represent nationalists. "Just look at the record of Jeffrey Donaldson in representing nationalists. That's why it's important for nationalist to come out and vote for Sinn Féin in Lagan Valley. We have already challenged the sectarianism and exclusion that exists towards nationalists in Lisburn City Council and we are not afraid to stick our heads above the parapet and challenge the inequalities which still exist."

Sinn Féin's Jim Gibney, who is on the election trail along with Butler, told An Phoblacht that the party is not taking any vote for granted, as a tough battle lies ahead.

"It is a difficult constituency to canvas as the nationalist electorate is scattered throughout what is a mainly rural constituency," he said. "But every door that can be knocked will be knocked, because these canvasses are very focused and widespread. Paul has represented the people of Lagan Valley and that is why these people will vote for him. He has never reneged on any promise he has made to the electorate."

Gibney said Sinn Féin voters are steadily growing in confidence because they have every confidence in Paul Butler increasing the party's vote in Lagan Valley.

"In the last Assembly elections, Sinn Féin increased the vote by 70% and in the 2001 council elections Sinn Féin had 16% of the overall first preference votes in Lagan Valley.

"The reality is that nationalist voters are realising in bigger numbers than before that Sinn Féin is the only party to give real leadership in confronting the old unionism and the old unionist attitudes. That is clearly to be seen in our campaign against Lisburn Council's decision to exclude everyone but unionists from the main positions within the council.

"Sinn Féin will make history in the election", promised Gibney. "The people know it and are supporting us."