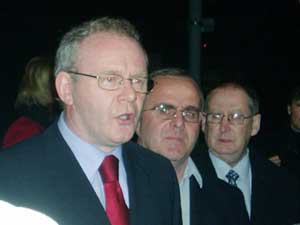 After the treatment of Martin McGuinness by Lord Saville at the Bloody Sunday Inquiry last week, it might be interesting to muse a little on the objectivity of both the distinguished Lord in his manner of conducting the inquiry, and on that of the British media, which turned up in vast numbers for the first time at the Guildhall, Derry, on day 390 of the inquiry to pick over in minute detail the evidence given by Martin McGuinness. So, consider the following:

Some of the things about the Bloody Sunday inquiry that the British media has not been interested in:

• the refusal of Edward Heath to answer questions about Bloody Sunday and Lord Saville's failure to ensure that he did;

• the possibility that one of the most senior serving officers in the British Army, Colonel Mike Jackson, perjured himself to the inquiry;

• the possibility that in 1972 senior MoD legal officials, particularly Colonel Ted Overbury, doctored soldiers' statements in order to cover up or justify the shootings;

• the refusal of the MoD to submit crucial documentary evidence to the inquiry;

• the destruction, by the MoD, of the surviving rifles used by the soldiers on Bloody Sunday, as well as of film and photographic evidence;

• the retraction by the former army forensics officer, Dr John Martin, of all his evidence to the Widgery inquiry;

• the repeated attempts by the current British Secretary of State for Defence to thwart the inquiry.

• the evidence that the 1972 Stormont Regime, personified by John Taylor, wanted the British army to undertake a policy of shooting Catholic civilians in an attempt to maintain control;

• the fact that General Ford also advocated such a policy in Derry shortly before Bloody Sunday;

• the testimony of photographers that they were shot at by British solders on Bloody Sunday to stop them recording what was going on;

• the revelation that one of the British Army soldiers involved in Bloody Sunday, 203, joined the UDA shortly after;

• the testimony of one former British Army major, who wrote in his diary that the Paras were a 'dreadful and ghastly' regiment, consisting of 'savage, trained terrorists' who took pleasure in 'legalised murder' and whose treatment of civilians on Bloody Sunday was 'beyond description';

• that Soldiers F, H and others were accused, during the Saville inquiry, of murder.

Questions that Lord Saville has allowed counsel to the inquiry and lawyers representing British soldiers to ask Martin McGuinness:

• the identity of members of the IRA on Bloody Sunday;

• the activities of the IRA before and after Bloody Sunday;

• the activities of Martin McGuinness before and after Bloody Sunday;

• his membership or otherwise of organisations other than the IRA (long) before Bloody Sunday;

• the exact locations of safe houses and arms dumps in 1972 and the owners of those houses.

Questions that, between them, Lord Saville, the British judiciary and the British government have not allowed lawyers for the families to inquire into:

• the identity of the members of 1 Para who carried out the killings;

• the identity of British agents and intelligence service personnel on Bloody Sunday;

• the activities of the members of 1 Para responsible for the shootings whilst on duty elsewhere in the Six Counties before and after Bloody Sunday — even when this involved the systematic abuse and indeed shooting of civilians;

• the UDA activities of Soldier 203 after Bloody Sunday;

• the evidence of the British agent 'Infliction';

• anything Edward Heath did not want to answer.

People Lord Saville has threatened with jail for refusing to answer questions to the inquiry:

People who will not face the threat of jail:

• the soldiers who opened fire on unarmed civilians;

• the soldiers, MoD officials and their political masters who are suspected of perjuring themselves to both Widgery and Saville;

• soldiers who refused to answer questions;

Number of people killed and wounded by the British Army on Bloody Sunday:

Number of people killed and wounded by the IRA on Bloody Sunday:

Who, exactly, do you suppose, has got something to hide?