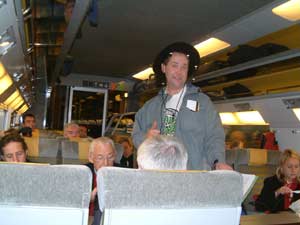 Ian, Ian, the Celts are here!

• Papa Doc Paisley must be losing his touch. He used to be able to smell a Fenian at 50 yards but he didn't spot this Celtic cowboy looming over him on the fast train to Brussels. Papa Doc is an MEP and has business in sur la Continent, but why is Baby Doc Ian Paisley Jnr keeping Daddy company on his foreign foray?

IF YOU'RE LUCKY enough to read this early after publication on Thursday, be sure to tune in to this week's Hearts & Minds (evening broadcast on BBC2 with a late-night repeat on BBC1) for a rare TV glimpse of the lesser spotted DUP leader, Papa Doc Ian Paisley.

The DUP leader's nurses are straining themselves to keep him out of the leader-to-leader Assembly election debates with other parties. DUP North Belfastman Nigel Dodds has been standing in while his loud leader is kept in the background with the volume turned down.

The slick willies in the DUP campaign room don't mind taking the old boy out for a day trip on the DUP election bus and a stroll around the shops, but he's being kept away from anything too strenuous or anywhere near a microphone without his medication.

The DUP princes (Robinson, Campbell and Dodds) fear that Old King Paisley will make a holy show of them by wearing his old Ulster Resistance red beret, harking back to the Third Force, kicking the Pope, or otherwise damage the DUP's holier than thou self-portrait.

Tonight's rare outing in the grounds of the BBC is a carefully supervised one-to-one with Noel Thompson, with maximum effort by Peter Robinson & Co to ensure the DUP is no more disturbed than usual.

Soldiering on with Labour?

NOEL THOMSPON'S election interview with Mark Durkan last week asked the SDLP leader if the SDLP (sister party of the Rabbitte and Blairite Labour Parties) is going to merge with Fianna Fáil. But Brother Durkan danced around the question and decidedly declined to answer yes or no.

With former Fianna Fáil svengali Martin Macken having to share the SDLP back room with a Progressive Democrats policy wonk and a 26-County Labour apparatchik to beef up Durkan's lumbering campaign, is Mark holding something back?

THE Progressive Democrats guru massaging the figures of the SDLP previously had a much bigger job on his hands, handling the media brief for PD Leader Mary 'I Wannabe Margaret Thatcher' Harney.

True to market forces, former PD press officer Jack Murray has already been bought up by the SDLP. Now Mark Durkan's lady in waiting, Bríd Rodgers, has been seen wandering like a lost soul around the corridors of Leinster House in the past fortnight, trying to recruit establishment party TDs and senators to join the 'Save the SDLP' campaign. Rodgers was spotted signing up another PD, Fiona O'Malley TD, daughter of the detested Dessie. We understand she is planning to canvass with the Stoops in Omagh.

But perhaps those in the party who still believe that something of their title, the Social Democratic and Labour Party, still actually means something might ponder the words of PD supremo Mary Harney in the Dáil on 14 October:

"I believe that leftism is losing that battle in all parts of the free world now. And I believe that leftism is certainly losing that battle here in Ireland... We have reduced the role of the state in the economy... Indeed it is hard to find any left-wing idea which has contributed anything to our social and economic prosperity in recent times. Left-wing politicians may have contributed something; but left-wing politics has contributed nothing."

By their friends ye shall know them.

THE Ceann Comhairle, Cavan/Monaghan TD Rory O'Hanlon, was less than pleased last week when the mischievous Sinn Féin deputy from Louth, Arthur Morgan, tried to raise the following proposal in the Dáil:

"In light of the offering of their advisory services by two of the three right-wing parties in the 26 Counties to the SDLP for the election campaign in the Six Counties, the necessity to ensure that the Fine Gael strategists who guided the party in the 2002 general election are urgently deployed to assist the SDLP and also the necessity for the former leader of the Labour Party to return to West Tyrone where he proved such a success for Sinn Féin in the 2001 Westminster Election."

Bobbies on the right

MUCH CONCERN among Britain's chattering classes about the revelation that up to 12 police officers in one particular force belong to a right-wing, supremacist and militant pro-loyalist organisation that engages in unlawful actions while purporting to administer justice without prejudice.

The revelation that up to 12 members of the West Midlands Police (infamous in history for the Birmingham Six frame-ups) are active members of the British National Party is raising serious worries about the police service's ability to administer justice. A former West Midlands police officer may even stand as a BNP candidate in elections.

British Home Secretary David Blunkett has even called for membership of the BNP to automatically disqualify anyone from becoming a police officer.

Will this logic be extended by Blunkett's and Blair's Cabinet colleagues to the PSNI?

Anyone Who Had a Sash

THE Orange Standard, the Orange Order's monthly newspaper, actually has a good thing to say about one high-profile Catholic celebrity singer. No, not the Pope — Cilla Black.

The '60s songbird-cum-TV presenter is even described by the Standard writers as "the popular Liverpool lass" because she said that, as a kid, she loved the music of Orange bands.

Even former Orange Grand Master Martin 'Mirthless' Smyth raised his bushy eyebrows in something approaching appreciation, even if the newfound fan is a Fenian.

You'd need a "lorra, lorra" luck being a Catholic on the Shankill on the 12th.

ZERO TOLERANCE of gangsters might be making a comeback in Dublin if the community-based free tabloid, the Northside People, is anything to go by.

While TDs complain that Gardaí are being outsmarted by the greater technology used by drugs barons and crime lords, the Northside People revealed that a "revolutionary communications system" used by Northside Gardaí will be deployed across the 26-County state. The new system will allegedly stop the hoods listening in to Garda communications. But somehow the story doesn't do justice to the headline: "Gardaí cut off dealers' ears."

Now that would be revolutionary.