Sinn Féin demands right to housing be enshrined in Constitution 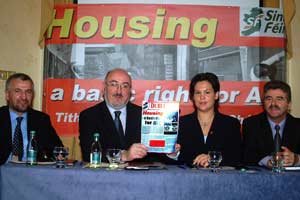 "The government's record on housing speaks for itself." These weren't the words of Sinn Féin's spokesperson on the Environment and Local Government, Arthur Morgan TD, rather they were the words spoken, without the slightest hint of irony, by the Government Minister of State with responsibility for housing in the 26 Counties, Noel Ahern. They were spoken during the course of a Dáil debate on Sinn Féin's Bill, which sought to enshrine the right to housing in the 1937 Constitution.

The government's record on housing came in for close scrutiny as spokespersons from all the opposition parties and a number of independent TDs launched a series of stinging attacks.

Opening the debate, Arthur Morgan said: "The right to housing is central to Sinn Féin's commitment to building an Ireland of equals and has long been central to our housing policy." He went on to say that the context in which Sinn Féin was putting forward the Bill was the "unprecedented housing crisis, affecting virtually every family" in the country.

"After six years of unbroken reign which came during the biggest economic boom this State has ever known, this Administration managed to increase the number of homeless and the social housing list to more than 48,000 applicants, representing in excess of 100,000 people," the County Louth TD said. He also pointed out that average new house prices across the State had increased by 177% since 1998 from €125,000 to €222,000 by the end of June this year. Second hand houses had increased by almost 200% in the same period.

Explaining why Sinn Féin believed that the constitution needed to be changed in relation to housing, Morgan said, "the absence of a constitutional right to housing has contributed to the severe housing crisis and resulted in a poor commitment from government and officials to address the housing crisis. Our amending Bill would force social policy to be centred on delivering this basic right as opposed to the current situation where the delivery of adequate housing is left to the whim of politicians and dependent on the economic climate and political priorities.

"A constitutional right to housing would oblige statutory bodies to provide adequate and appropriate housing for all the people of this State and would ensure that a basic standard of housing provision would be upheld. It would also ensure that the voiceless and the most marginalised in society would not be penalised by their lack of political strength or representation," he said.

Anticipating government opposition, Morgan said, "it is important to emphasise that Sinn Féin has not asserted, as the government will no doubt infer, that the insertion of a constitutional right to housing will on its own magically resolve the complex housing and homeless crisis.

"It represents a first step, which must be followed by legislation which will bring about the progressive realisation of this right. We foresee that a constitutional right to housing will bring about a fundamental change in how we as legislators address the housing crisis and the housing needs of the people of this State."

Quoting Noel Ahern's own words in which the Minister of State said, "the government's view is that it would be inappropriate to include a legal right to housing in the Constitution", Morgan said: "Yet he does not think it is inappropriate to ignore the housing crisis?"

Also speaking for Sinn Féin during the debate on Tuesday evening were Seán Crowe and Martin Ferris.

Crowe, highlighting the many statistics available in relation to the housing crisis, said: "Numbers, statistics and figures give us an overview of the housing problem but they cannot give us the full picture." Numbers, he said, "do not tell us what it is like to sleep in a doorway in the middle of winter. Statistics cannot explain the stress a mother feels trying to raise her children in bed and breakfast accommodation. They do not tell us how she is supposed to boil a hot bottle for an infant or what she does during the day when she is forced to leave such accommodation.

"Figures cannot tell us the frustration a young couple feel when starting out in life with a mountain to climb, if they are ever to own their own home.

"The housing crisis is caused in the main by, uncontrolled vested interests in the private house building sector, underfunding of local authority house building programmes by central government, and the failure to plan for the long-term housing needs of a growing population," he said. Instead of tackling these elements Deputy Crowe accused the Government of "presiding over an economy that brought huge wealth into the coffers of the State but failed miserably to provide housing for its citizens."

Challenging the Progressive Democrats assertion that the 'free market would solve all our problems' Crowe said it had not and that the "market serves only the interests of the developers and their friends in the construction industry, the land grabbers and the housing speculators, the people appearing at the tribunals, the same people who bankrolled the establishment parties."

He said it was Sinn Féin's belief that social and economic rights are every bit as important as civil rights.

Expanding on this, Martin Ferris quoted the United Nations as saying that 'the indivisibility and interdependence of all human rights find clear expression through the right to housing'. The absence of a right to housing, he maintained, curtails "the ability of many of our citizens to enjoy the civil and political rights already contained in the Constitution." Just one example of this is the inability of homeless people to vote, he said.

Supporting the Sinn Féin Bill, Independent TD Finian McGrath described it as a progressive piece of legislation, which he said, "sets out to do something radical, creative and practical for people on housing lists". The Green Party said it was "high time that recognition was given to a right to housing within the Constitution".

"It is not good enough for the Minister to respond by listing all the houses being built. They are not being provided for the people who need them and that is what we need to debate," Green TD Dan Boyle said.

While expressing some reservations about the Bill, Fine Gael said that "the principle behind this Bill is commendable" and that "every child of the State should be seen as equal and the right to a roof over one's head seems fundamental".

During the course of Minister of State Ahern's response to the Bill, he was heckled by a number of opposition TDs, who took exception to his self-congratulatory record on the housing crisis. Slamming Ahern's assertion that "the new affordable housing initiative being developed is aimed at further enhancing the supply", Arthur Morgan interrupted saying it was nothing more than an "illusion".

The debate was set to continue as we go to press with all opposition parties for the first time indicating that they were likely to support the Sinn Féin Bill.