Good Friday Agreement will not be renegotiated 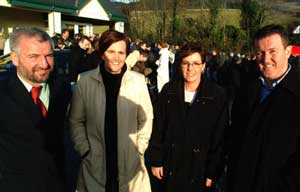 Edentubber Martyrs Commemoration 2003 - Sinn Féin President Gerry Adams MP delivered the keynote address at the annual Edentubber Commemoration in County Louth on Sunday afternoon. He said that republicans have good cause to be disappointed and good cause to be angry about the events of 21 October but "we must not allow this to cloud our political judgement. We are committed to this process and we do not intend to walk away from it. Nor do we intend to allow others to deny or escape from their obligations with respect to this process." He went on to say: "There cannot and will not be any renegotiation of the Good Friday Agreement. There can be no new agreement. But there obviously is a need to make sure the unfinished business of the Agreement is completed."

"I want to comment briefly on events of 21 October and the discussions which led up to these events. It is just over a year since the British Government collapsed the political institutions.

"It's decision to do so, and the cancellation of the May elections, caused enormous frustration and anger among all of us who have vested so much in building the peace process, in constructing the Good Friday Agreement and in pursuit of the full implementation of the Agreement. The approach of both governments in this period and indeed before has tested the patience of republicans to the limit.

"In the run up to the summer months the Sinn Féin leadership initiated an intensive dialogue with Ulster Unionists. Our objective was to try and ensure that people living on the interfaces had as peaceful a summer as possible. And although some areas continued to face difficulties, in the main our dialogue succeeded.

"We also sought to ensure that the election, which we were demanding, would take place in a climate most conducive to bringing about restored political institutions on a stable basis.

"This intense dialogue between the UUP and Sinn Féin has been a hugely important development in itself. Notwithstanding the present difficulties and whatever the explanation from the UUP about their failure to deliver on what they had agreed to, this must be protected. The task facing us has undoubtedly been made much more difficult by the position adopted by the UUP. But dialogue, a genuine dialogue with them is key to future political progress. So, we will return to this in the wake of the election.

"For the record let me state again. The culmination of our discussions with the UUP was an agreement on a choreographed sequence of statements and events to give public expression to that agreement. This included statements and actions from Sinn Féin, the IRA, the UUP and British and Irish Governments.

"Sinn Féin delivered our part of this sequence as agreed.

"The IRA delivered their part of the sequence as agreed.

"It was then that the UUP walked away.

"Only they can explain why. They have yet to adequately or satisfactorily do so. And whatever their reason or explanation it was certainly not because republicans did not deliver.

"David Trimble knew what the IRA had undertaken to do. And David Trimble knew that neither he nor, for that matter, Sinn Féin or either government, could dictate how the IICD, an independent body, would report this. So, it beggars belief, and it is totally unacceptable, that the entire peace process should be put on hold because the UUP were not satisfied with the IICD description of the IRA initiative.

"But of course, the UUP are not the only ones who have yet to deliver on their commitments. Both governments were also part of the agreed choreographed sequence which was to begin on 21 October.

"So, there is a particular onus on Dublin and London to honour the commitments which they made as part of the overall agreement. This requires them to address and resolve a number of issues including the implementation of a programme of demilitarisation, a resolution of the issue of OTRs, and the need for northern nationalist representation in the Dáil, among other matters. We will also return to all of this after the election.

"Let me make it clear. There cannot and will not be any renegotiation of the Good Friday Agreement. There can be no new agreement. But there obviously is a need to make sure the unfinished business of the Agreement is completed. An increased Sinn Féin vote is one way to ensure that. No one here should be surprised that the two governments have not fully implemented their commitments.

"Why would they when the SDLP is always prepared to settle for less? That is why this election is so crucial. The immediate task for all republicans is to increase the Sinn Féin mandate. We need to strengthen our hand."