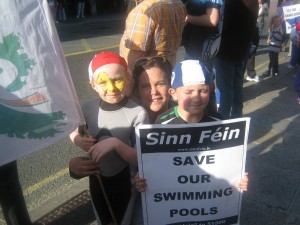 Sinn Féin’s Mary Lou McDonald has criticised Labour, Fine Gael and Independent councillors who supported the city budget responsible for creating so much uncertainty about the pool’s future.

“We were particularly disappointed that Independent and Labour councillors supported such an inequitable budget,” Mary Lou said.

“Targeting inner city areas for cuts in critical service provisions simply does not make sense on any level. Yet this is exactly what Labour has done by supporting this year’s budget.

“Shutting down sporting outlets for kids and adults in deprived areas is just crazy and it is hard to understand how a party of the Left can rationalise this kind of decision.”