Everyone deserves a home 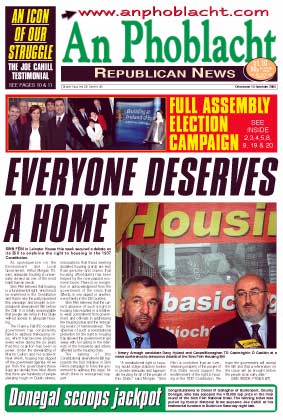 Speaking at the end of a Dáil debate on a Sinn Féin Bill to enshrine the right to housing in the 1937 Constitution, Caoimhghin Ó Caoláin on Wednesday called on the Environment and Local Government Minister Martin Cullen and junior Minister Noel Ahern to resign over their handling of the housing crisis.

The tabling of this Constitutional amendment Bill represents the first initiative in Sinn Féin's campaign to force the government to address the housing issue, for which there is widespread support.

"Under the Constitution as its stands there is more protection for a block of luxury apartments owned by a multi-billionaire property speculator that there is for a homeless person who could not in their wildest dreams afford the shelter of one of those apartments," Ó Caoláin pointed out. "The property rights of the speculator are fully guaranteed by the Constitution. The homeless person's right to adequate housing is not recognised.

"This government does not take seriously the obligation of the State to ensure that our citizens are adequately housed. Overall responsibility resides with the Minister for the Environment and Local Government Martin Cullen, but like his predecessor Noel Dempsey, he hides behind his Minister of State. There is no full Cabinet Minister for Housing and no Department of Housing.

"All we get from the government these days are denials from Noel Ahern that there are hundreds of people sleeping rough on Dublin streets, insinuations that those seeking disabled housing grants are less than genuine and claims that housing affordability has been helped by the now passed economic boom. There is no recognition or acknowledgment from the government of the crisis that affects, in one aspect or another, every family in the 26 Counties.

"These should be established and as a first step, and because of their dismal failure on housing, Minister Cullen and Minister of State Ahern should resign.