Honouring an icon of our struggle 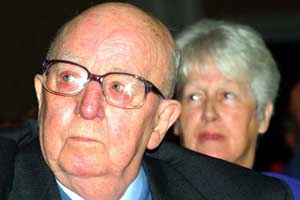 Last Saturday night, republicans gathered at the City West Hotel in Dublin to honour a man rightly described by Martin McGuinness as a colossus of the struggle. Up to 900 friends, family and comrades attended the testimonial function for Joe Cahill, a stalwart of republicanism since the 1930s.

A host of musical talent entertained throughout the night, including Cormac Breathnach and Niall Ó Callanáin, Noel Hill and Liam O'Connor, Tony McMahon and Barney McKenna, Barry Kerr and friends, Terry 'Cruncher' O'Neill and Spirit of Freedom. Céilí dancing has long been a passion of Joe's and he was also treated to a performance by dancers from Derry's Glen Gallaigh Céilí Club, joined by under-16 world champion dancer Leanne Curran.

It wasn't long before Joe's exploits over the decades of struggle were aired, Marian Reynolds of Irish Northern Aid in particular reminding the audience of Joe's tremendous impact in the United States on behalf of the republican struggle. "Joe founded Irish Northern Aid," Marian reminded the crowd as she made a presentation on behalf of the US-based group. "It was a pleasure working with him over the years."

The main address was delivered by Martin McGuinness, who said he was "delighted to be here" after what had been a hectic week, a reference to his attendance as a witness at the Bloody Sunday Inquiry in Derry. "A number of people asked me was it very stressful," he said. "I haven't talked to the lawyers for the soldiers since Thursday so I don't know how they feel."

He thanked each individual for their attendance in support of Joe, Annie and their family, adding that this testimonial night was important for the entire republican family. "This man is a towering colossus of our struggle over many many decades," he said.

"My first memory of Joe was seeing him on television in the Bogside when I was 20 years old. I saw what I took to be an elderly gentleman wearing a cloth cap. That image has always stuck with me. In the terrible circumstances of how the nationalist community of Belfast had to live, here was this man in a cloth cap, challenging the might of unionism and the British Government. Joe is an ordinary man who has done extraordinary things with his life, and he did it for his beliefs and for his community.

"He stood forth and, with the support of others, built a movement, joining with others across Ireland to take the battle to the British. He was not afraid of danger, nor was he in it for himself. Joe was never afraid to risk his liberty or his life in the struggle for Irish freedom.

"We have built a movement that now stands stronger than ever before, and that is because of people like Joe Cahill. The people I would have looked up to were Joe and Séamus Twomey, JB O'Hagan and John Joe McGirl, among others, people who gave leadership at a time of great crisis.

"We owe a lot to Joe, Annie and their family. It hasn't been an easy life for any of them, involving hardship, separation and uncertainty over where they would live.

"Joe travelled the world to advance the struggle. They recognised him as a freedom fighter. Without that massive contribution our struggle wouldn't have been as effective as it has been over the past 30 years."

McGuinness then moved on to talk of Joe's vital role in the strategy that has led republicans to today's political juncture, referring to the split of 1986. Faced with the obstacles created by the enemy, he said, republicans in the past had had a tendency to run at the wall. "We adopted a different approach. We would go under the wall, over the wall or around the wall, by any means possible. It was difficult for many older people to come to terms with this different approach to winning freedom. Without the support of people like Joe and JB at that crucial stage we wouldn't be where we are today.

"In 1986 Joe showed that he was youthful in his mind. He was prepared to learn from the mistakes of the past. He gave his support and we benefited from it."

McGuinness then referred to the looming Assembly elections. "In these elections we may do well, he said. "We may do very very well. If we do it will be thanks to Joe Cahill.

"We love Joe Cahill very much. He is an icon of our struggle. And we love Annie Cahill very much for standing by him, and his children too. And we respect the Cahill family for their courage, determination and refusal to give up.

"We are very confident of our ability to win this struggle and we are determined to do that. Joe will be with us at all times and we will always remember his contribution to our key objective, an end to British rule in our country and the establishment of a 32-County republic."

Dublin singer Frances Black then took to the stage to pay a personal tribute. "I am absolutely and utterly honoured to be here tonight," she said. I first met Joe Cahill in the early 1980s, the Hunger Strike years." Frances recalled "amazing sessions" in her parents' home involving Joe and Annie, Joe's great friend the late Bob Smith, and his wife Bridie. She had lost contact with the Cahills until recent years, when she began travelling to Belfast to perform at the West Belfast Festival and had been the recipient of frequent hospitality in the Cahill home. "The thing I remember most about Joe is his stories," she said. "One afternoon in the house he told me the story of Tom Williams. Then Annie sang the ballad of Tom Williams. That was an unforgettable moment for me.

"Joe and Annie's dedication to and passion for the struggle has been an inspiration to us all."

As her personal tribute, Frances delivered a heartfelt rendition, unaccompanied, of Down By the Glenside, aka The Bold Fenian Men. There was a heedful silence throughout, everyone captivated, until she delivered particular emphasis to the lines, 'We may have brave men, But we'll never have better', and the room erupted in applause.

Gerry Adams was in good form when he spoke briefly. Referring to McGuinness' address, he quipped "it's good to see these old IRA people paying tribute to each other".

He drew attention to the presence in the hall of Madge McConville, who had spirited away the weapons in the operation that saw the arrest of Tom Williams and Joe Cahill: "My wife said to me, 'aye, and she didn't decommission them."

He then called on Annie Cahill to sing the Ballad of Tom Williams, which was ably delivered, to great applause.

Joe Cahill then rose to speak. Despite recent ill health, he had plenty to say and took the time to say it all. This has been a very emotional night for me," he said. "I didn't anticipate that so many people would turn up. When I was listening to Martin, I had to take a look around to see who he was talking about. But I have had a long life. I have had a good life. I have had a lucky life, where many people have helped me."

He recalled an incident a number of years back when, being discharged from the Royal Victoria Hospital in Belfast, he had looked out a window onto Cave Hill and thought back over the centuries of struggle, beginning with the discussions of the United Irishmen on that hill, and of their aim of changing the names of Catholic, Protestant and Dissenter to Irish people. He recalled Thomas Francis Meaghar, who brought the Tricolour from the barricades of France to the Irish nation, with the Green and Orange sections standing for Catholic and Protestant, respectively, and the White in the middle for the truce between them.

Recalling his decades of involvement in the republican struggle, he said: "People always ask me, what keeps you going? I always think of Bobby Sands and 'that thing inside that says I'm right'. That's what drives me on. I know we're right. There was also no revenge in Bobby Sands' heart. His revenge 'will be the laughter of our children'.

"I think also of my comrade Tom Williams and the last days I spent with him in the condemned cell, and his letter to his comrades and the then Chief of Staff - 'The road to freedom will be hard, many's a hurdle will be difficult. Carry on my comrades until that certain day'.

"It was Tom's desire to be taken from Crumlin Road Prison and be buried in Milltown Cemetery in West Belfast. This is what determination and consistency in work does. I thought it wouldn't happen until we got rid of the British but people worked long and hard and we got Tom's remains out.

"I too have a dream. In 2005, we will celebrate the 100th anniversary of Sinn Féin. We may not have our freedom by then but we can pave the way by then. Hard work brings results.

"I would hope that by 2016, the 100th anniversary of the 1916 Rising, we will have seen the dreams of the United Irishmen. We will by then have seen the hand of Protestant and Catholic clenched together honouring the Tricolour. We will have seen that certain day that Tom Williams talked about, the day of freedom, and we will have had our revenge, the laughter of our children, as written about by Bobby Sands.

"This leadership of Sinn Féin will bring us to freedom. I am proud to serve under them and ask you to do everything in your power to give them your support."

Joe then turned his attention to the women in his life, recalling that in this regard he has been most fortunate. "I owe a terrible lot to Annie," he said. "Never once did she say don't or stop. She always encouraged me." He recalled how, in an interview with An Phoblacht earlier this year, he had expressed just one regret, the suffering of his family. "That was tough," he said. "I often thought of Annie struggling with our son Tom and the six girls, Maria, Stephanie, Nuala, Patricia, Áine, and the baby, Deirdre. They are a credit to her and I thank God for people like my mother and Annie."

Joe finished with a typically passionate flourish to spur his listeners on to greater efforts. "Whatever little you've done in the past, do that little bit more and by Christ we'll have our freedom."

This was a very special night and those who were lucky enough to be there will have come away inspired by the example of one man and his family but aware that we are all part of the republican family and we are all on the one road. Joe Cahill has played a major role in that shared journey of struggle but, to copy Joe in echoing Bobby Sands, we all have our part to play.