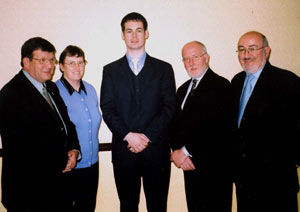 Sinn Féin representative for Donegal Southwest, Pearse Doherty, was last weekend selected as the party's candidate for the Northwest region in next year's European Parliamentary elections on the proposal of Cavan/Monaghan TD Caoimhghín Ó Caoláin. With the addition of County Clare, the Connacht/Ulster constituency is to be renemed Northwest for the 2004 poll.

Doherty is well known in County Monaghan. He is engaged to a young Inniskeen woman, Róisín Boyle, who is a nurse in Letterkenny hospital. The couple are to be married next autumn. Pearse's first election campaign was spent in the Cavan/Monaghan constituency in 1997, when he worked alongside local canvassers in the campaign that secured the election of Caoimhghín Ó Caoláin to Leinster House for the first time.

A civil engineer by profession, Pearse Doherty is a fluent Irish speaker and an avid GAA supporter. A member of MIJAG, the national lobby group campaigning against the high cost of motor insurance, Doherty argues that this is a major issue, especially for young drivers.

Speaking after his selection at the Silver Swan Hotel in Sligo on Sunday last Doherty said:

"I am delighted to have been selected. Over the last five years Sinn Féin has gone from strength to strength throughout this region. Our success in the local and general elections, which is nowhere more evident than in the Cavan/Monaghan constituency, shows that our agenda for change — in terms of the peace process, rural regeneration, the environment and the direction of the European Union — is popular. The addition of County Clare to this EU constituency opens up new ground for all of the parties and it is a challenge that I look forward to.

"The public debate on the European Union during the two referendums on the Nice Treaty and indeed the deliberations of the National Forum on Europe, have reflected significant public disquiet about the political character of the EU. People the length and breadth of the country have demonstrated an appetite to engage, to challenge and to exert their influence on the shape and direction of the EU.

"Sinn Féin politics are about democracy, equality, the rights of citizens and of nations. We are the radical alternative to the failed politics of the establishment parties who have been invisible for so long in Europe. Our campaign begins now. We will be taking the debate on the EU Presidency, the new draft EU Constitution and the re-formulation of CAP to communities throughout Connacht/Ulster. We are campaigning to make a real difference and to see an all-Ireland Sinn Féin team returned to Europe."

Congratulating Pearse on his selection, Caoimhghín Ó Caoláin said that "as someone who stood for the party at this level on two previous occasions I know the challenges that it presents. I am confident that Pearse is up to those challenges. He understands the issues that affect the people in this border region and in the west of Ireland. I can state in all honesty, as someone who has worked alongside him, that no other candidate will match the ability and commitment of Pearse Doherty if elected to the EU parliament and no other MEP will represent the interests of this region as he will."