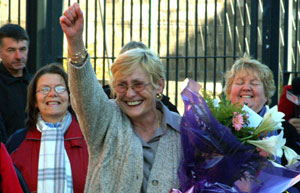 On Tuesday morning Justice Finnegan in the High Court in Dublin fined six anti-bin tax protesters €1,500 each and jailed them for three weeks. The previous day, he had fined eight bin charge protestors €200, despite the fact that they had undertaken not to further disrupt bin collections.

Evelyn McDermott, a mother of one of those sent to prison, was enraged. "My son was involved in a civil protest against bin taxes which are unjust and which a majority of people in our area are refusing to pay."

Meanwhile the bin protests go on — some at the depots, some in the housing complexes. Protestors are standing by the law, extant until last summer — that it is illegal to fail to collect peoples' waste (irrespective of whether they have paid their waste charges.) Minister McDowell simply changed the law before the Dáil went on summer vacation.

Meanwhile, the whole issue of bin collections in the city has taken a new twist. SIPTU members of Dublin City Council's cleansing section voted last week for a half-day work stoppage today (6 November) in support of workers in Oxigen, which collects the 'green bins' of paper and tins in Dublin city, under contract.

Oxigen has refused to negotiate with the union over pay and conditions, and alleges that only 30 of its 300-strong workforce are in the union. Oxigen marks the first step in Dublin City towards the privatisation of waste collection. As 'waste for recycling' is collected by private companies, so the council workers will lose their work and jobs.

At this week's Dublin City council meeting on Monday, a broad group of councillors, including Sinn Féin, proposed a motion that the council should only contract out to companies that give the opportunity to join trade unions, and should put the contract out to tender for an alternative contractor if Oxigen failed to meet this obligation.

"Everyone," says Sinn Féin councillor for Finglas, Dessie Ellis, "should have the right to join a union should they want to. I find it a disgrace that the council should be entering into contracts with companies where this is not the case — or where the right to negotiate wages is not accorded to the relevant union."

In a most significant decision, the chair ruled this motion out of order, because, it was alleged, it contravenes EU rules which stipulate that institutions cannot impose regulation on private companies.

"The implications of this decision," Dessie points out, "are grave. Does this judgement mean that the council cannot insist on its private contractor 'partner' companies not upholding what we in Ireland regard as a basic human right — namely the right to join a trade union and to negotiate working conditions and pay? What an encroachment on our sovereignty! There was a lockout in 1913. Nearly a century down the road, and are we back to the situation then?"

Meanwhile, fear of escalating waste charges rose this week when it was pointed out by campaigners in Galway that charges increased by four times in Belgium when incinerators were introduced. The Galway for a Safe Environment (GSE) group, which has been active in the fight against the incinerators the environment minister has promised to every region, predicts that incineration could bring charges to at least ?1,000 per annum per household.

Already in some areas in Ireland, for example Sligo, waste charges, paid to private companies, have gone over ?500 — with no waivers for people on welfare payments.

Dublin's City manager flagged up clearly, at the beginning of the waste bin dispute, that water charges, supposedly required again by the EU, are just around the corner. "After waste it will be water charges, make no mistake," says Dessie Ellis.