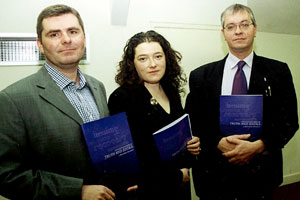 Members of Victims groups and ex-prisoners' groups from the nationalist and republican community launched a consultation paper on truth mechanisms in Belfast this week. The paper is aimed at developing a discussion about the quest for truth and justice as part of the conflict resolution process in the North of Ireland.

"This is a bold and imaginative step from people most directly affected by the conflict. They are taking the initiative in putting forward principles and values which must be at the core of any process," said a spokesperson at the launch.

The document has been put together by Eolas, an informal grouping of organisations and individuals with specific experience and expertise. The name of the group is taken from the Irish word for 'information'. Over a three-year period, a number of grassroots groups working with those directly affected by the conflict have been networking around issues of policy and practice.

One of the central issues that arose for all organisations involved was that of truth and justice in an evolving context of conflict resolution. "Against a wider backdrop of sporadic, but often intense focus on the issues of political prisoners and victims, it was apparent that the need to deal with the past was increasingly urgent." But how exactly this could be achieved was not being seriously examined.

"One example of this was the absence of comment on truth and justice from the Victims Strategy produced by the joint Office of First and Deputy First Minister under the devolved government, despite many organisations underlining it as a priority," says Eolas.

"One of the biggest challenges facing us as a society is dealing with the legacy of a prolonged conflict in which over 3,000 people died and human rights abuses were systematically perpetrated," says Eolas.

In a statement issued at the launch, Eolas pointed out that the subject of our collective past and its outstanding issues has been a vexed one. "There is a need for a mechanism that addresses the contentious issues of truth and justice," said the spokesperson. "By and large all of the political players in one form or another have accepted that we need to deal with contentious issues from the conflict.

"Whether it's David Trimble seeking recognition for the suffering of RUC families, Gerry Adams raising the outstanding cases of state and state-sponsored abuses or Hugh Orde suggesting that society needs to move to address outstanding cases, we are putting forward a feasible process which may realise such a mechanism."

The paper outlines a range of different approaches that have been used in many different countries and situations in dealing with the legacy of the past as a process of social transformation. The document places the discussion of various 'truth mechanisms' within the specific history of British occupation in Ireland, most particularly within the North.

The document points out that in the last three decades, more than 24 countries coming out of a period of sustained political violence have decided to have a Truth Commission about the past.

The impetus behind this has been a legacy of severe abuse of human rights during a period of political conflict about which the truth had previously never been told. "As the societies moved into a transitional phase, the unfinished business of the previous regime had to be tackled," says Eolas.

While acknowledging the importance of many informal approaches to dealing with the past, the document considers the advantages and shortcomings of different kinds of formal truth mechanisms.

From trials and tribunals through to inquires and truth commissions, the document highlights their contribution to "reconciliation and closure in society overall" and their role in "producing a society in the future very different from the one in the past-one where human rights violators do not act with impunity, where a culture of abuse is turned into a culture of tolerance and where everyone agrees that the abuses of the past will never occur again."

The document attempts to place these considerations within the specific context of Ireland, and the conflict in the north. "In relation to the north of Ireland the British state is duty bound under both international agreement and law to investigate thoroughly, promptly and impartially all acts of violence within its jurisdiction," says Eolas. But the document argues the British have demonstratively failed to do this.

In regard to state killings, or killings by supporters of the state, the British administration has presided over investigative procedures that are "perfunctory, lacking in independence and designed to cover or exonerate their actions", says Eolas.

"By contrast, the state has used draconian emergency legislation, including non jury Diplock courts, to imprison other combatant groups in great numbers. This official practice has protected the disclosure of much wider administrative policies such as shoot-to-kill and collusion and providing impunity to its agents."

There are many lessons to be learnt from other societies' experiences of truth mechanisms but there is no 'one size fits all' solution. Eolas argues that any truth process must suit the particular local circumstances within which it takes place.

"The context is dependent on a range of factors but perhaps the most significant of all are the political circumstances within which negotiations over suitable mechanisms take place," says Eolas. But while "the reality of the prevailing balance of forces will inevitably shape the process", that should not "prevent the development of new, dynamic, innovative and locally owned ways of dealing with the past".

To further the debate, Eolas presents three different models of truth mechanisms developed by separate working groups within the umbrella organisation. Through this imaginative process, Eolas hopes to generate a consensus model. A number of common threads have already emerged from the three models.

These include the recognition of the importance of an international dimension to truth and justice mechanisms as an imperative to ensure independence of the process and the need for a bottom up, community orientated and victim centred process, with direct involvement in the design of the mechanism.

The working groups also suggested there should be a balance between the individual and institutional approach, geared towards "establishing the broad contextual truth and examination of the role of institutions". The need for any mechanism t