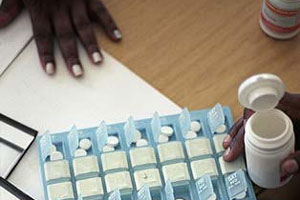 According to the United Nations body dealing with AIDS, UNAIDS, an estimated 30 million people in sub-Saharan Africa have HIV. About 58% of these are women. There were approximately 3.5 million new infections in 2002, representing 70% of the global total. That figure is continuing to rise. The situation is now so bad in some African countries that it is contributing to the spread of famine as workers are lost to the disease. AIDS is a rising epidemic in developing countries. Although progress is being made in the area of prevention, there has been little or no hope for those with the HIV virus, as access to those drugs that make the survival of HIV sufferers in the Western World possible are too expensive to be bought and distributed in most developing countries.

For years, NGOs and governments have been fighting for the right to produce generic AIDS drugs that would reduce the cost of these drugs for millions of people. However, pharmaceutical companies opposed this possibility, placing cash above lives. However, the announcement on 23 October of the finalising of a deal brokered by former US president Bill Clinton that provides agreement between four pharmaceutical companies and the governments of developing countries to facilitate access to cheap drugs, is bringing hope that the battle against AIDS may yet be won. AIDS organisations have hailed the deal as a breakthrough, with the potential to save millions of lives.

The four companies, Ranbaxy Laboratories Ltd, Cipla Ltd, Matrix Laboratories Ltd, and Aspen Pharmacare Holdings, will manufacture and distribute two of the most commonly used combination drug-therapy cocktails. They will provide the medication to several nations in Africa and the Caribbean at less than a third of the cost of patented versions. Clinton, whose foundation has been pressing for cheaper treatments, said treatment could now begin in places where until now there had been virtually no medicine and no hope.

"There are five to six million people in the developing world with AIDS and in urgent need of the drugs," Clinton told reporters at his Harlem office. "Only 200,000 to 300,000 are receiving treatment. The rest are simply being left to die."

Nine countries in the Caribbean, as well as Mozambique, Rwanda, South Africa and Tanzania, will receive the low-cost medication. The agreement was reached after advisors from the William J Clinton Presidential Foundation worked with the drugs firms to find ways to cut costs. Clinton said antiretroviral drugs will be offered at $140 per person a year, "almost half the current price of inexpensive commonly used drugs." Under the deal, the price of a generic triple-drug regimen will be less than 40 cents a day, as opposed to more than $1.50 for the same patented medicines. Chopping the price of drugs is a huge issue for poor African countries, where many people survive on as little as $300 a year.

"This agreement will allow the delivery of life-saving medicines to people who desperately need them," Clinton said, adding that he hoped that up to two million people would receive the cut-price drugs by 2008. Clinton has also secured partial funding from wealthier nations to help the countries pay for the drugs and for improvements in the countries' health systems. Ireland, for example, has committed $58.3m over five years to Mozambique. The four African nations have each secured additional funds from other sources, including the World Bank and the Global Fund to Fight AIDS, Tuberculosis and Malaria.

The most recent figures from UNAIDS show Africa as a continent divided in two. In North Africa, up to 0.5% of the population has been infected with HIV, while in sub-Saharan Africa, that figure is 8.8% but rising to almost 40% in some countries. In four countries - Botswana, Lesotho, Swaziland and Zimbabwe - at least one in three of the population is HIV positive.

In Africa's case, most experts believe that sexual contact is responsible for 90% of HIV transmissions. There has been a well-documented lack of awareness about the disease across the continent, which experts say fuels the spread of HIV through unsafe sex.

Obviously, one possible way to improve the prevention rate would be the promotion of the use of condoms. However, many Catholic-based NGOs would oppose this, as it goes against the Vatican's policies. Many Christian Churches would also oppose the use of condoms, as it was clearly outlined by current US President George Bush's decision to dedicate millions of dollars to HIV/AIDS prevention and treatment while excluding any NGO or event that would promote the use of condoms.

As recently as two weeks ago, the European Commission criticised the Vatican for suggesting condoms do not protect users against HIV, saying the assertion had no scientific basis and could worsen the global AIDS pandemic.

"Condoms are part of the solution. The condemnation of condoms is part of the problem," Poul Nielson, European Commissioner for development and humanitarian aid, said in a statement issued on 21 October which was clearly aimed at rebutting a senior Roman Catholic cardinal who declared the AIDS virus could slip through condoms because of their "permeability".

There is a fear that Asia may be facing a similar AIDS epidemic in the next few years. The United Nations has called on leaders of the Asia-Pacific region to brush aside cultural taboos and step up efforts to educate their people about HIV/AIDS if a serious epidemic is to be averted. "One of the illusions in Asia is to think that this is just a disease of the poor, the junkies, the prostitutes and their clients," UNAIDS Executive Director Peter Piot told Reuters.

"The choice is clear for me. It's either act now or pay later," he said of a region that the UN says could see an "African-style" crisis and could account for 40 percent of new global infections by 2010. To succeed, governments must destigmatise safe sex and widen education on prevention measures, he said.

Nearly one million people in the Asia-Pacific region were infected with HIV in 2002, taking the number living with the virus to 7.2 million, according to UNAIDS data. Nearly half a million people are estimated to have died of AIDS in the past year and Asian nations with huge populations - China and India - are finding HIV is accelerating, Piot said.

Only one percent of India's adult population has HIV, but that translates into 3.97 million people living with HIV at the end of 2001 - the second-highest figure in the world, after South Africa. In China, the number of people officially living with HIV in mid-2002 was one million, but UNAIDS said unless effective responses took hold, 10 million Chinese will have been infected by the end of the decade - equal to the population of Belgium.

Two bright spots in the battle against AIDS are Thailand and Cambodia, where HIV infection rates are on the decline. "Thailand is one of the few hope-giving stories on AIDS," Piot said. Thailand had slightly more than 20,000 new cases last year, down 83% from the 140,000 new cases of 1991. But that did not mean Thailand could afford to rest on its laurels. UNAIDS says transmission modes have changed: instead of commercial sex workers spreading the disease, wives and young Thais are now starting to show increased rates of HIV infection.