Sinn Féin is in this process to the finish - Adams 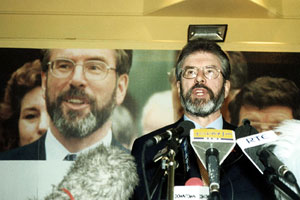 The following is the full text of Sinn Féin President Gerry Adams' keynote speech on the Peace Process in the Balmoral Hotel on Tuesday morning.

I welcome this morning's announcement of an Assembly election on 26 November. This was a point of principle and a core issue for Sinn Féin.

It is the context for today's developments. The people assembled here today will be representing Sinn Féin.We will be seeking an endorsement of our strategy and of the positions I will outline today.

I appeal to the electorate to use their vote and to use it wisely in support of a continuing process of change and a peaceful and just future for all our people.

The last ten years of the peace process, and especially the last five years, have been a political and emotional rollercoaster ride for republicans and unionists, nationalists and loyalists.

We have been through a lot together. As republicans we have been faced with enormous challenges. We have confronted those challenges.

Each year, and sometimes more than once in a year, we have reached what some have described as another crossroads‚ in our struggle. Some years ago I compared all this to a journey.

For us the destination is an Irish republic. Completing the journey means having a political strategy to get us there. It means engaging with and putting our case to our opponents. It means taking the political offensive, taking initiatives, and engaging in the battle of ideas.

Sinn Féin is a united Ireland party. But being an Irish republican means more than paying lip service to the 1916 Proclamation or to the ideal of The Republic.

It means refusing to stand still.

It means reaching out to others.

Republicans are not quitters. We have refused to give up. We have refused to countenance a continuation of division, discrimination or injustice. We have campaigned, agitated, lobbied and challenged those who want to return to the old failed policies of the past.

We have sought and are seeking to change minds and attitudes. We are trying to build new and better relationships between the people of this island and between us and the people of Britain.

In recent months, and especially in the last few weeks, the Sinn Féin negotiating team has been involved in intense discussions with the Ulster Unionist Party and the two governments.

Much of the media focus has been on the IRA. The reality is that all of the participants and the two governments have significant contributions to make if the institutions are to be restored and the Good Friday Agreement made to work efficiently and effectively.

It isn't just down to republicans. It never was.

Making this process work is a collective responsibility. Republicans need to know that the two governments will honour their commitments. Republicans need to feel confidence in a unionist leadership working the institutions and the Agreement and joining with us as partners in the task of building a better future for our people.

Equally, unionists need to have confidence in republicans.

In this context, let me make some remarks about the current situation. The initiatives taken in April and May by republicans to resolve outstanding matters were rejected. There was a lot of justifiable anger about that. But now we need to move on.

The Joint Declaration produced by the two governments at that time has good and positive elements in it; particularly around those aspects of the Agreement which have yet to be implemented.

It is generally acknowledged that the focused work of Sinn Féin's negotiating team, led by Martin McGuinness, brought the governments to this position. I want to commend all our team and to thank them for their outstanding contribution.

The commitments in the Joint Declaration to finally resolve the outstanding issues are welcome. These and key issues of the Agreement are about creating a stable society. They include:

o Equality in all its dimensions.

o The transfer of powers on Justice and Policing.

o The demilitarisation of society.

o The entrenchment and effective protection of human rights.

o The anomalous situation of people On The Run.

Other aspects of the Joint Declaration are unacceptable. The establishment of the so-called International Monitoring Commission is a breach of the Agreement and it contravenes the safeguards built into it.

It takes the right of democratic accountability from the elected Assembly and gives the power of sanction and exclusion over political parties in Ireland to a British Minister with no electoral mandate here.

Republicans have worked to have the Good Friday Agreement implemented, not only because that is our obligation, not only because that is the right thing, but because it fits into a strategy to create an alternative to conflict. It is a peaceful means of bringing about change and of sustaining and anchoring the peace process. I want to reiterate my total commitment to playing a leadership role to bring an end to conflict on our island, including physical force republicanism.

Our strategy to do this is based on creating a purely peaceful and alternative way to achieve democratic and republican objectives. I say this conscious of the dangers and risks and in the certain knowledge that there is no easy way to sort out these issues.

I have no illusions about any of this and I know my commitment is shared by the Sinn Féin leadership.

We are totally committed to building the peace process.

The length of the IRA cessations, first declared almost ten years ago, its discipline in the face of ongoing British military and loyalist activities, and its initiatives to sustain the current process, show that it too is genuinely interested in building the peace process.

I commend them for this.

The Good Friday Agreement, with its vision of a fair and just society operating exclusively democratically and peacefully, was democratically endorsed by the vast majority of the people of both states on the island of Ireland. Sinn Féin is committed to the full implementation of the Agreement.

The IRA leadership wants the full and irreversible implementation of the Good Friday Agreement in all its aspects and they are determined that their strategies and actions will be consistent with this objective.

Implementation by the two governments and the parties of their commitments under the Agreement provides the context in which Irish republicans and unionists will as equals pursue their objectives peacefully, thus providing full and final closure of the conflict.

Actions and the lack of actions on the ground speak louder than words and I believe that everyone - including the two governments and the unionists - can now move forward with confidence.

As President of Sinn Féin, I have set out a peaceful direction which I trust everyone will follow. Sinn Féin's position is one of total and absolute commitment to exclusively democratic and peaceful means of resolving differences. We are opposed to any use or threat of force for any political purpose.

Sinn Féin wants to see all guns taken out of Irish society.

There is also an onus on the two governments, and particularly the British government, to underpin and validate the primacy of politics.

I want to appeal directly to those organisations which are not on cessation at this time. While calling on all armed groups to desist I want to appeal especially to organisations which present themselves as republican. I appeal to them to join with the rest of us, republicans and unionists, nationalists and loyalists, in taking a leap forward together and collectively building a new future based on justice and peace.

Anyone looking at this situation during the 1960s, the 1970s, the 1980s and for much of the 1990s, could be forgiven for believing that there are some conflicts which simply never end, where distrust and hatred are so much a part of the fabric of the society that things will never change.

But things have changed. Our success in bringing this about was not a matter of chance; it was a matter of choice. And republicans helped shape and give voice to that choice. For our part Sinn Féin is totally committed to establishing an entirely new, democratic and harmonious future with our unionist neighbours.

Like it or not we're all in this together.

Sinn Féin has been involved in intensive discussions with the UUP over recent weeks.

This direct and open dialogue between unionists and republicans is in itself a profoundly important development and the key to ongoing political progress.

Consequently, we understand the importance of reaching out to unionists; of learning about unionist concerns, fears and aspirations. Of explaining to them how we feel.

One of the big things we have to do together is to tackle the scourge of sectarianism. This remains a huge challenge for unionists and loyalists, republicans and nationalists.

This needs to be built on. It will not be easy, but it is not impossible.

Many unionists, particularly working class unionists, are already conscious of the way in which they have been exploited. Unionist working class areas face enormous social and economic problems. Families, the elderly and the young are weighed down with poverty, deprivation and a sense of despair. This is totally unacceptable.

When Sinn Féin demands equality it is for everyone.

We also have to reach out to those who are in negative mode. We reject exclusion and isolation. They are the politics of failure.

I believe we have the collective knowledge and the means to make this century the most peaceful, prosperous, productive time in the history of Ireland.

The question is do we have the wisdom and the will? I believe we have. I believe that together we can build a future of equals on this island - a peaceful future which empowers, and enriches and cherishes all the children of the nation equally.

The people of this island have the right to be free - to live free from discrimination and inequality, without violence and conflict.

Sinn Féin means to journey on from there, to be part of building a republic worthy of the suffering and sacrifice of all of those who have gone before us.

I want to appeal to republicans throughout Ireland and abroad to continue to support Sinn Féin's peace strategy. Initiatives by republicans cause pain and difficulty for all of us.

I know activists will have reservations about much of this. But we have to look at the bigger picture. We have to look towards the common good.

Bobby Sands summed it all up best for me. Despite great hardship, deprivation and physical hurt he never lost sight of his vision for a new Ireland, an Ireland in which our revenge will be the laughter of our children.

It is always easier to begin a journey. The hard thing is to finish it.

Sinn Féin is in this process to the finish.