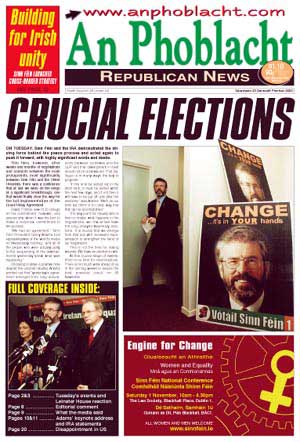 On Tuesday, Sinn Féin and the IRA demonstrated the driving force behind the peace process and acted again to push it forward, with highly significant words and deeds.

This time, however, after weeks and months of negotiations and contacts between the main protagonists, most significantly between Sinn Féin and the Ulster Unionists, there was a confidence that at last we were on the verge of a significant breakthrough, one that would finally clear the way for the full implementation of the Good Friday Agreement.

David Trimble saw fit to renege on his commitment, however, and jumped ship when it was his turn to make a reciprocal commitment to the process.

"We had an agreement," Sinn Féin President Gerry Adams told representatives of the world's media on Wednesday morning, "and all of the people who were actually party to the sequencing of the developments yesterday knew what was happening."

Choosing to strike a positive note despite the unionist rebuffal, Adams pointed out that "yesterday's agreement emerged from long discussions between ourselves and the UUP and that development in itself should not be undervalued. That dialogue is in many ways the key to progress.

"If this is to be sorted out in the short term, it must be sorted within the next few days, and if not then it will have to be put off until after the elections," said Adams. "We'll do our best but there is no clear way that that can be accomplished."

The key point for republicans is that no matter what happens in the negotiations, we now at last have the long delayed Assembly elections. It is crucial that we emerge from that poll with increased representation to strengthen the hand of our negotiators.

This is not the time for licking wounds. We have an election to win.

At this crucial stage of events, there is no time for recriminations. There is too much work ahead of us in the coming weeks to secure the best possible result on 26 November.