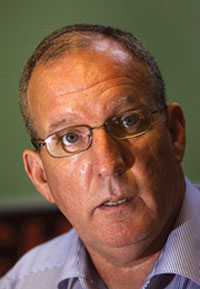 IF someone said to you, there is a small group of people whose actions are designed to:
• Cause the remilitarisation of the Six Counties;
• See British troops back on our streets;
• See sectarian attacks carried out by loyalists;
• Close the democratic space now open to republicans;
• Reduce support for republican goals in Ireland and internationally;
• See an end to power-sharing institutions in which republicans wield more political power than ever before, and are using this to advance Irish unity and equality;
Who would you think they were referring to? British military intelligence? Or people calling themselves ‘republicans’?

Some of the individuals who are involved in these small militarist factions may genuinely but mistakenly believe they are furthering a republican cause. Some are using such groups as flags of convenience for criminality. Others are – without a shadow of a doubt – working to sabotage the republican movement, to roll back significant gains won over the past decades, and to undermine the framework now in place for moving towards reunification.

IRA Volunteers fought an armed struggle to remove British soldiers from the Six Counties – the actions of these people are designed to bring them back.

That needs to be called for what it is – a securocrat agenda. So there is a question to be put to these factions.

Who is pulling your strings? Do you even know?

The IRA carried out an effective, sustained military campaign against British forces with the active support of republican communities – with large numbers of disciplined Volunteers, and a level of international support and financial backing that will not be forthcoming in today’s circumstances.

On the basis of the inability of the British forces to defeat the IRA – as well as Sinn Féin’s work in building alliances and mobilising political support across the island and internationally – the Irish Peace Process was launched.

The Good Friday Agreement, St Andrew’s and now the Hillsborough Agreement provide the framework to achieve full equality and reunification.

So how is a much smaller military force, lacking the strength, skills, discipline and support the IRA had, going to achieve more than the IRA?

These groups openly admit that they have no chance of achieving an end to partition by their armed actions. Their stated goal is to “prevent normalisation” in the Six Counties.

In other words, they are openly aiming for remilitarisation – for repression, for the closure of democratic space, and for an end to the process of transforming the PSNI – so that a slightly broader number of people will be drawn into armed activity, with all of its associated costs. And then what? To this question they have no answer.

This is no justification for any loss of life, and for the destruction of other lives through imprisonment. It is a huge price to be paid for such a narrow, dead-end goal.

The approach of these groups is anti-democratic. They fail to engage with the broader community in any positive way and treat the opinions and will of their neighbours with disdain and hostility.

They have completely failed to outline not only their strategy for achieving a united Ireland; they routinely fail to even provide a public explanation or justification for their actions. They fail to outline their political vision of what kind of society they want to build and the only point they agree on is the use of physical force.

These groups are incapable of outlining any strategy that could convince people that armed actions offer a route to a united Ireland today – because the political conditions have been changed definitively as a result of Sinn Féin’s work in creating and leading the peace process.

Sinn Féin’s peace strategy provided a route out of cyclical violence based on advancing democratic rights for all and establishing structures that empowered the excluded. This has changed people’s lives for the better and there is no turning back.

A strong, confident, effective republican leadership now offers a way forward towards a united Irish Republic using political and democratic means. So these groups need to understand that there is zero chance of drawing significant numbers of people back into conflict.

Sinn Féin will continue to resist attempts by securocrats to use so-called dissident republican actions to remilitarise the North or retain political policing. We will continue to argue politically with militarists on the fringes of republicanism that the road they’re on goes nowhere.

To describe what is happening in the North as the “normalisation” of partition is absurd. What is taking place is a process of transformation, led by republicans, of steadily dismantling the Orange state and ripening the conditions for reunification.

Major challenges remain and Sinn Féin is continuing to lead the struggle against the British military presence and for the transformation of policing into an accountable, acceptable civic service.

The role of British forces in Ireland, and of the repressive Orange state apparatus established since partition, has always been to try to crush the national and democratic aspirations of the nationalist people.

All the momentum – political, economic and social – is towards a united Ireland. Remilitarisation would be the biggest block to the existing momentum for change.

The success of the republican movement to date has been based on Sinn Féin’s political strategy of creating the political conditions where republican communities could no longer be isolated, criminalised and censored.

Republicans can make the most gains towards unity in the most open, free, non-repressive conditions possible. This is a fact. These political conditions and this democratic space have been achieved by the struggles and sacrifices of generations.

The power-sharing institutions and all-Ireland bodies established as part of the agreements do not entrench partition but undermine it. The stabilisation and development of these institutions – which help us build a working relationship with unionists and also increase cross-border integration – is positive for republicanism.

To try to bring about remilitarisation is to close the space won by republicans in Ireland’s political life for the goal of narrow recruitment purposes (at best) by small groups. All their actions can achieve is to slow down this process of progressive change and the momentum towards unity.

Again, the question arises: whose interests are the actions of these groups serving?

There is a long and proud history of armed rebellion against British colonialism in Ireland. We rightly have the most profound respect and admiration for the actions and sacrifices of men and women who fought, and often died, in their effort to bring about an end to British rule.

But we don’t glorify war itself. We honour their commitment to furthering the cause of republicanism.

When military campaigns have been effective in Ireland – namely in the Tan War and the recent IRA war – it was because the actions of the occupiers meant there was no other option but to direct the resources of the republican movement into armed struggle. In these circumstances such a move was supported actively by a significant section of Irish society.

People who advocate using armed methods in today’s circumstances argue abstractly about the right of republicans to resist British rule using force. But while republicans have rights, they also have responsibilities – most fundamentally the responsibility to put the needs of the movement first and ask: is this the most effective way to advance republican goals based on the concrete conditions we are currently experiencing?

We all have to ask what is going on here. Who is behind these groups? Who benefits the most from their actions?

Our communities need to stand up and reject these counter-productive actions, and the disruption to the community, the self-serving vigilante activities and criminality that comes with it.

At the same time, we all have to maintain our focus and keep moving forward towards Irish freedom, unity and equality.

That is where Sinn Féin’s strategy is bringing us.