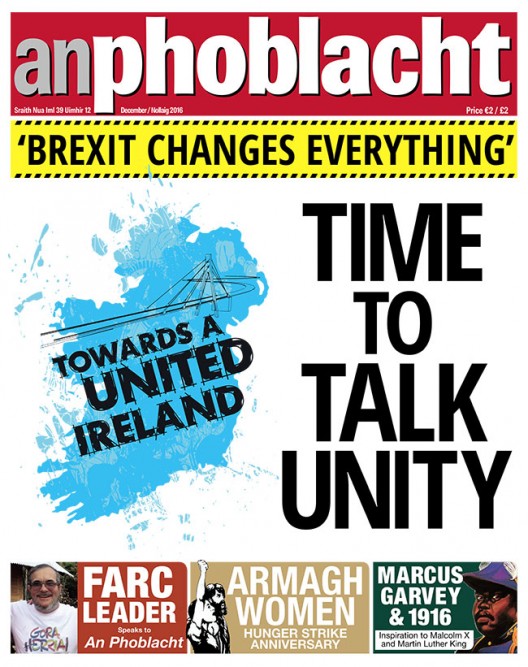 THE Fine Gael/Fianna Fáil partnership government with the cover of compliant Independents is the same old politics wrapped up in the emperor’s clothes of new politics. Free article

SINN FÉIN MINISTERS announced plans for major projects in the Assembly this month that will see huge transformations right across society. Free article

WHILE there had been insurrections before 1916 against the British and French empires in many of their territories, the events of Easter week 1916 in Dublin had much greater international significance as they occurred closest to the centre of the imperial power. It was also at a time when there was a huge gathering of the world press nearby in London, covering the First World War. The New York Times carried the uprising as its main lead story every day for over two weeks. It was talked and written about right across much of the globe. Free article

Charlie One: The True Story of an Irishman in the British Army and His Role in Covert Counter-Terrorism Operations in Northern Ireland Merrion Press €13.99 Free article

RACISM was thrust back into the headlines when former Alliance Party MLA Anna Lo publicly branded the North’s largest party, Arlene Foster’s Democratic Unionist Party, as “the most racist party in Northern Ireland”. Figures show that as many as three racist incidents per day are reported in the North. Free article

A KOREAN WOMAN in her early 30s came to Ireland in February, seeking asylum for herself and her young child. They were given a small room to live in at the Kinsale Road Accommodation Centre in Cork. Free article

PHOTOGRAPHER Paul Carroll has spent the last six years capturing the action of Gaelic club games in their unique and amazing surroundings in all 32 counties of Ireland for his book Gaelic Fields. Premium service article

THE news of the recent death of John Burke, at the age of 72, was received with great sadness in the Fermanagh/Cavan border area as well as further afield. Free article