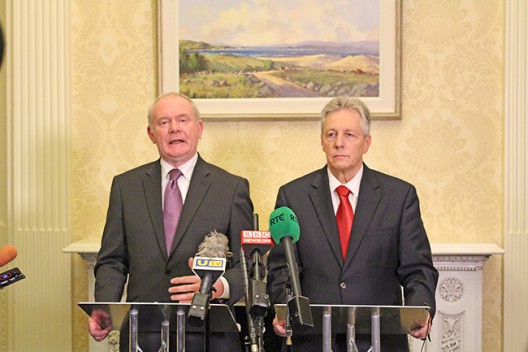 THE CRISIS in the political institutions was created by Tory austerity and their failure to honour commitments made in the Good Friday Agreement and other agreements, including full disclosure on the legacy of the past. Free article

MLAs and TDs hear call for international conference on Palestine

IT IS IRONIC that the revelations involving such an important British agent as Brian Nelson should come in a Sunday newspaper the weekend that the British Government conclusively reneged on the commitments arrived at during last year’s Stormont House talks when the architecture for the disclosure of information for the families of people killed in the conflict was agreed. Premium service article

THREE SHOUTS ON A HILL is a collection of essays by the celebrated writer, TV personality and acclaimed historian Éamonn Mac Thomáis. Éamonn’s involvement in the Republican Movement spanned four decades, including periods as Editor of An Phoblacht and as a republican prisoner charged with membership of the IRA. Premium service article

Triumph of the prisoners' spirit

FINE GAEL AND LABOUR continued their policy of eroding Irish neutrality as Taoiseach Enda Kenny announced that he was willing to deploy extra Irish troops to Mali in order to ‘free-up’ French forces following the horrific gun and bomb attacks by the so-called Islamic State in Paris which killed 130 people on 13 November. Premium service article

Christmas 2015 something in common with Christmas 1915

CORRUPTION IN SPORT, unending foreign wars, endless advertisements, and all the Abbey plays written by men. The media issues in 1915 and 2015 have a lot in common. The missing element from the December 1915 coverage is substantial mention of the growing Irish Volunteer movement. Police reports throughout late 1915 reflect the depth of this absent aspect of the news media coverage of the time. On 29 November, the police reports that “this body of Irish Volunteers numbers 10,000 strong, with control of 1,500 rifles, possibly more, thoroughly disloyal and hostile to the British Government”. Premium service article

THE death has occurred of Una Sloan (née Kane) of Ballyboden, Dublin, a committed republican activist and a former Sinn Féin candidate who passed away at a tragically young age at St Vincent’s Hospital on 16 November. Free article