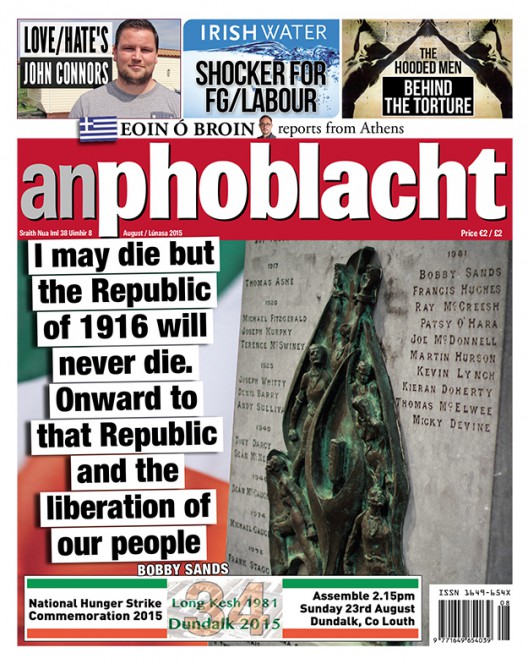 THE HUNGER STRIKE is the pinnacle of resistance demonstrated by Irish republican prisoners down the decades of Irish history. Free article

SINCE 2011, Bahrain has seen plenty of political turmoil with many of its citizens calling for reform, democracy and universal suffrage. The Shia majority within the state is marginalised and treated as second-class citizens in strong contrast with the Sunni minority, the same religion as the royal family. Since this began to occur, the level of harassment and attacks that Shia Muslims have faced at the hands of pro-government militias has increased tenfold. We can see history repeating itself and comparisons between the North of Ireland during the 1970s/1980s and Bahrain today. Free article

What lessons should we learn from the Greek defeat?

THE CAPITULATION of the Greek Government to the completely vindictive and unrealistic demands of the European Union and the Eurozone finance ministers has naturally been seized upon by reactionaries here to pretend that this proves there is no alternative to austerity. Premium service article

Shocked, disorientated and in mourning

THE WISDOM OF TAXI DRIVERS is almost universal, and Athens is no exception. Again and again, taxi drivers told the same story. They rubbished the deal imposed on Greece by her creditors but believed that Alexis Tsipras was their best hope. Premium service article

Lessons for Irish progressives from Greece and Spain

SYRIZA took power in Greece; Podemos has risen to prominence in Spain. The following outlines six lessons that I believe progressives in Ireland should consider to be successful electorally. Premium service article

A YEAR AGO it looked like the Dundalk Women’s Refuge County Louth would be forced to close due to massive cuts which saw their budget slashed by up to 75%. A ‘Government National Directive’ to the local authority decimated the Section 10 funding to the Refuge, making it impossible for them to continue as a frontline service for women and children experiencing domestic and sexual violence. Free article

A SURVEY of Dunnes Stores workers carried out by the trade union Mandate earlier this year found that two thirds of the successful retail chain’s staff are on part-time flexible contracts, yet a whopping 98% of these workers want more weekly hours. Free article

DURING 1912 and 1913, when it seemed that Home Rule for Ireland would come about, James Connolly was working on his vision of how the trade union movement could bring about a new society. This work was expanded and became a book which Connolly published in 1915 and called The Re-conquest of Ireland. It is a major statement, setting out many of Connolly’s key ideas. Premium service article