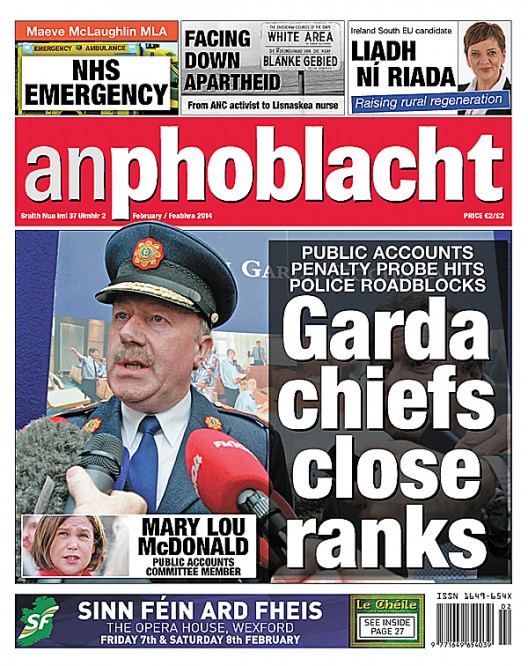 THE Oireachtas Public Accounts Committee probe into claims by Garda ‘whistleblowers’ that motorists had their penalty points ‘fixed’ by senior officers who quashed them was in doubt after dramatic interventions by Garda Commissioner Martin Callinan and Justice Minister Alan Shatter. Free article

SPEAK TRUTH TO POWER. It’s a powerful statement. For me it is a fundamental principle. Those who speak truth to power are nearly always brandished as contrarian or cranks. Sometimes they are even criminalised. Remember Edward Snowden and Chelsea Manning? Free article

Professor John Brewer, Professor of Post Conflict Studies in the Institute for the Study of Conflict Transformation and Social Justice at Queen’s University Belfast, writes for An Phoblacht Free article

No family left behind – Another View

The recovery being talked about in Government Buildings is one leaving the majority coping with rising costs and debts, falling income and crumbling public services Free article

MAEVE McLAUGHLIN MLA, Chairperson of the Health Committee in the North’s Executive, talks to An Phoblacht about the crisis in the Health Service north of the Border and Sinn Féin’s vision for the future. Premium service article

The labour movement is the key to changing the system

When will the organised labour movement flex its muscles and break with the stranglehold of austerity that its association with the renegade Labour Party has imposed upon it? Premium service article

THE Central Remedial Clinic and Irish Water scandals are part of a toxic political culture marked by ‘jobs for the boys’ and contracts for a small group of consultants and insiders who are closely linked to the Establishment. Free article

AT THE SAME TIME that Taoiseach Enda Kenny was telling everyone at the World Economic Forum in Davos that charities in Ireland “need to be seen to be on a very transparent, accountable footing”, his own Government TDs were voting down a Dáil Bill that would have done exactly that. The Fine Gael leader’s problem is that it was a Sinn Féin Bill and that’s why the Government was against it. Premium service article

THE Irish Volunteers – Óglaigh na hÉireann – were founded in November 1913 and grew rapidly across Ireland in the subsequent weeks and months. Free article

LURGAN MAN Martin Corey was released from Maghaberry Prison on Wednesday 15 January under stringent restrictions imposed on him about where he lives and not speaking to the media. Free article

AS KIDS, many of us probably dreamed of the chance of hopping into Marty McFly’s DeLorean and blasting off back to some bygone era. Free article