Irish support for the Spanish Republic 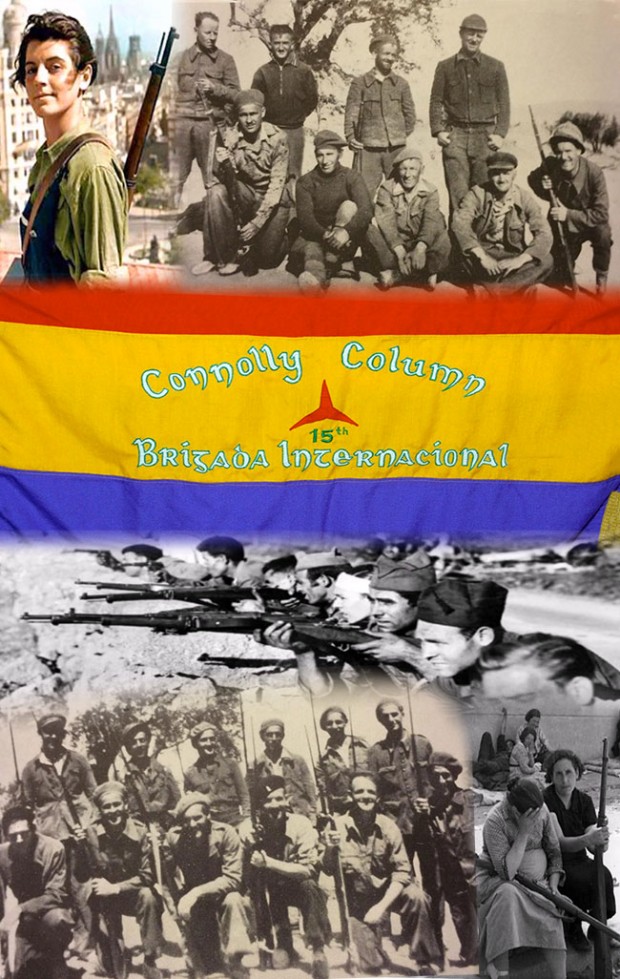 ‘Most of them, including the youngest, had at some time or other been members of the IRA in which they received military training’ – Michael O’Riordan

IN FEBRUARY 1936, the people of the Spanish Republic elected a Popular Front government which included Left republicans, socialists, communists and other progressive forces. The result reflected the great social upheaval of those so long oppressed by the old monarchy, the landed aristocracy, the Catholic Hierarchy, the capitalists in industry, and by Madrid’s suppression of the Basque and Catalan nations.

The new government raised the prospect of fundamental change and the forces of reaction quickly conspired to overthrow it.

Led by General Francisco Franco, senior Spanish Army officers attempted a coup on 17 July 1936. Largely due to the courage of organised and armed workers’ militias attached to trade unions and political parties (akin to the Irish Citizen Army), the coup failed to overthrow the Republic. But with the support of Mussolini in Italy and Hitler in Nazi Germany, Franco’s fascist troops grabbed and held large swathes of territory, igniting a war that lasted until April 1939.

Cardinal McRory, Archbishop of Armagh, in a sermon in Drogheda in September, said the choice was between Spain as “a Christian and Catholic land or a Bolshevist and anti-God one”. In a newspaper interview the cardinal called for help to obtain war supplies. Eoin O’Duffy, leader of the fascist Blueshirts, urged on by McRory, called for volunteers to form an Irish Catholic brigade for Franco. 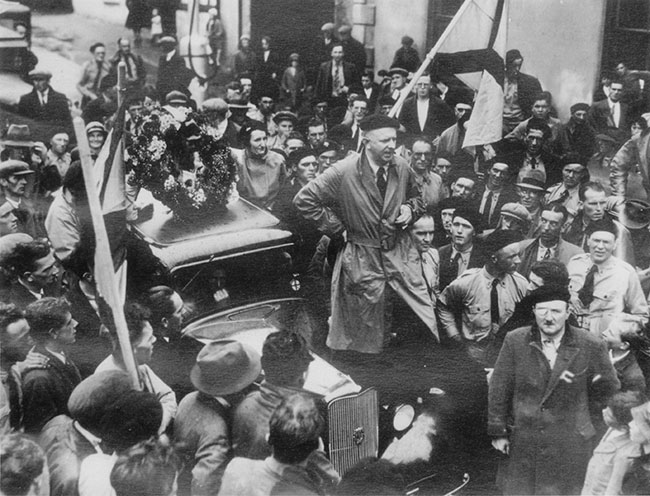 • Eoin O’Duffy, leader of the fascist Blueshirts, at a meeting in Bandon, Cork

Republican Congress, a party of Left republicans who had departed from the IRA in 1934, replied to McRory through their spokesperson, Frank Ryan, former editor of An Phoblacht. Ryan rejected McRory’s call and said Irish republicans offered “sympathy and support to the Spanish, Catalan and Basque peoples in their fight against fascism”.

In that summer of 1936, Peadar O’Donnell, also a former An Phoblacht editor and a Republican Congress founder, had visited Catalonia. He was there for the July coup and witnessed how the workers of Barcelona defeated the fascists. He assisted the republican forces with their English-language international news bulletin. On his return he worked to counter the anti-republican propaganda which was rampant in Ireland.

George Gilmore, joint secretary of Republican Congress with Ryan, travelled to Euskadi, the Basque Country. Basque independence was declared in October 1936 and Gilmore met José Antonio Aguirre, President of Euskadi. It was especially significant for the Irish that in the Basque Country the Catholic Hierarchy supported the Basque Government’s stand with the Spanish Republic against Franco. Later, a Basque priest, Ramón La Borda, did a speaking tour of Ireland.

Another prominent republican, Ernie O’Malley, IRA GHQ member during the Civil War and a legendary fighter in the Tan War, rallied to support the Spanish Republic. On 5 November 1936 he chaired a public meeting in Dublin where he challenged the virulently pro-Franco stand of the Irish Independent and the ‘Irish Christian Front’ led by Paddy Belton.

O’Duffy’s brigade sailed to Spain from Galway on a ship flying the swastika. Initially, Frank Ryan believed that the fight against fascism should be fought at home but the prospect of the Irish people being misrepresented as pro-Franco spurred him and others to travel to fight for the Republic. Communist parties across Europe were recruiting units for an International Brigade in Spain and the tiny Communist Party of Ireland decided in September that it would do so also. The unit’s organiser was Bill Gannon, a veteran of the Tan War and the Civil War. The unit drew volunteers from beyond the CP and Republican Congress. 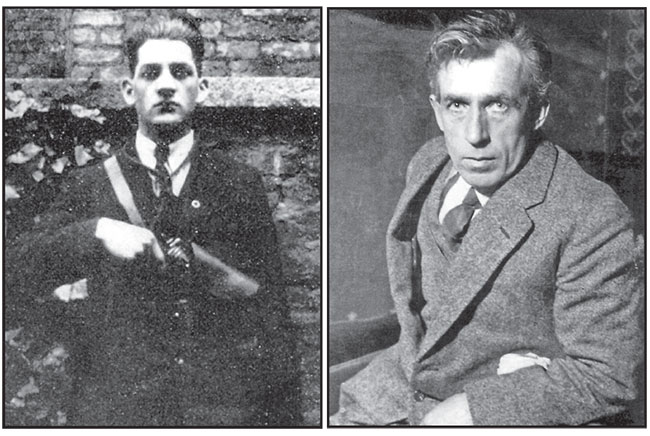 Led by Frank Ryan, the republicans left in small groups, most travelling through London and then on to France and across the border into the Spanish Republic. International Brigade veteran Michael O’Riordan recalled that the first Irish detachment went to the International Brigade base in Madrigueras to be shaped into a fighting unit. “This did not take long as most of them, including the youngest, had at some time or other been members of the IRA in which they received military training,” wrote O’Riordan.

The Irish chose the title of the ‘James Connolly Unit’; the ‘Connolly Column’ was the name later used to cover all the Irish who fought in various International Brigade formations.

The Irish first went into action on the southern front in December 1936. From the beginning, the death toll was high.

At Cordoba, eight volunteers were killed, including 17-year-old Tommy Woods from Dublin. Woods had been in Fianna Éireann and two of his uncles were on the IRA Roll of Honour – Patrick Doyle, executed in Mountjoy in March 1921 and Seán Doyle, killed in the Custom House attack in May 1921.

“We are going out to fight for the working class,” Tommy wrote to his mother.

Frank Ryan described the motivation of the Irish who, 80 years ago, went out to fight for the Spanish Republic:

“A demonstration of the sympathy of revolutionary Ireland with the Spanish people in their fight against international fascism. It is also a reply to the intervention of Irish fascism in the war against the Spanish Republic which, if unchallenged, would remain a disgrace on our people.

“We went to show that there is a close bond between the democracies of Ireland and Spain. Our fight is the fight of the Spanish people, as it is of all peoples who are the victims of tyranny.”

Frank Ryan – the Search for the Republic by Seán Cronin (1980)