Brexit – A threat to Irish national interests and a social Europe 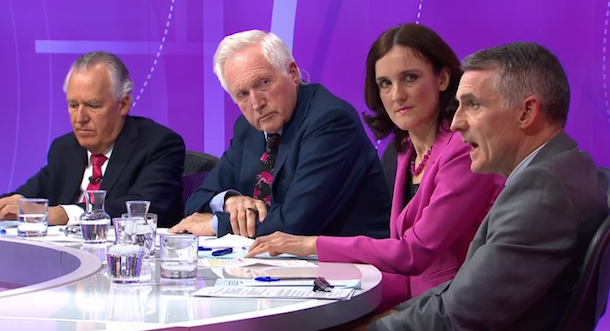 ON BBC’s Question Time with David Dimbleby just over a week ago, I asked British Secretary of State Theresa Villiers directly whether she believed a Brexit was in the interests of people in the North – she didn't answer the question.

I then asked her whether the British Government, in the event of a Brexit, would replace the European funding which would be lost to the North of Ireland as a consequence of withdrawal from the EU – she didn't answer that question either.

The fact is that a Brexit is opposite to the interests of people in the Six Counties. The combined financial loss of EU investment, subsidies and funds within this region arising from a Brexit would be in the range of £3.5billion.

The reality is that the North has depended heavily upon our relationship with Europe both economically and politically due to:

– Our endemic patterns of societal inequality and underinvestment;

– Decades of political conflict and its consequences, and

– The structural weakness of the regional economy, limitations of the public expenditure budget and our lack of fiscal independence.

During the period 2007-13, an estimated 10% of the regional economy's GDP was related directly to Europe, in terms of investment, trade, funding, and jobs. Then add to that the strategic significance of the North as a magnet for North American FDI and as a gateway to the European mainland.

The arguments for a Brexit made by its advocates in the British state and locally do not take account of these factors. They have failed to set out proposals which would prevent even more damage being done to the already weak structure of the local economy, as well as the destabilising knock-on effects upon all-Ireland co-operation.

The case for Brexit is not motivated or sustained by alternative and better strategies or policies.

Instead it is the product of a growth in influence by narrow English nationalism linked to conservative, Tory ideological interests.

The momentum for Brexit is a reaction against several things.

First, the continuing reverberations of the 2008 global financial crash.

Second, hostility to the promotion of rights and protections under the aegis of the European Parliament, European Court of Justice and European Charter of Human Rights.

Third, opposition to free travel, and a xenophobic resentment towards the international refugee crisis, which stems directly from war, conflict and global insecurity, especially in the Middle East.

Sinn Féin has deep concerns about the imperfections of the EU.

Over recent years the EU has shifted increasingly to the Right in response to, firstly, the changing nature and demands of international finance capital arising from global economic and financial instability: and, secondly, the resultant political acquiescence to, and adoption by, many European governments of austerity programmes.

As a result, democratic accountability, decision making and transparency have become casualties of this dominant trend.

We seek a social Europe which:

– Celebrates the primacy of people’s needs over corporate profits;

– Promotes and creates economic prosperity, but not at the expense of workers’ rights, fair play or tax justice, and,

– Is a champion of equality, inclusion and fairness.

But we also believe that the European institutions can only be changed from within – and not outside – the EU.

The correct strategic position from a republican and democratic perspective is to critically engage and reform the EU from within its structures.

That is the best way to challenge narrow nationalist, conservative and anti-democratic opposition to a social Europe.

So, Ireland's place is in Europe.

It would represent a major setback for the political process in the North and directly challenge the integrity of the Good Friday Agreement as an internationally-binding treaty.

It would also undermine all-Ireland co-operation and harden partition. Research from Open Europe has estimated that 3.1% of GDP would be lost to the South’s economy.

More generally, a withdrawal from the EU would have huge consequences for human rights legislation.

It is clear that this British Government has embarked on a strategy to dilute and restrict human and employment rights and other protections for citizens.

That agenda and its repercussions are unacceptable to Sinn Féin.

Last week I conducted a round of meetings in Brussels during which I met with leadership figures from all major political groups represented in the European Parliament (including the Christian Democrats, Social Democrats, Greens, Nationalists, Liberals, and the Left),as well as representatives of the Flemish Government.

It is clear that a widespread consensus exists across the European political spectrum that a Brexit would be massively negative.

All the meetings registered a willingness within the European Parliament to take positive initiatives in support of the political process and in opposition to Brexit.

This anti-Brexit consensus in the European Parliament also finds expression within civic society across the North.

On Friday, Martina Anderson MEP hosted a major conference on Brexit with very broad participation. This event made an important contribution to the developing public discourse across Ireland on this issue. That needs to be built upon. 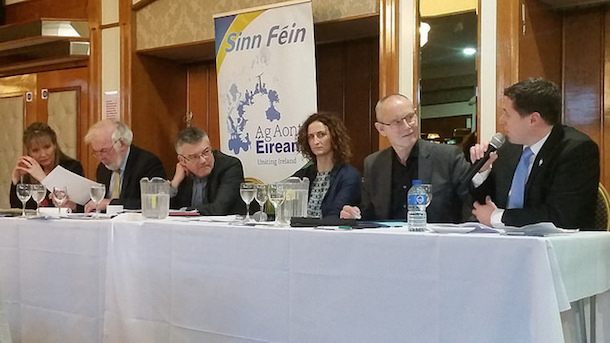 Those who recognise the dangers inherent in a Brexit now need to bring increased momentum to the debate among all sectors of society.

Opposition to Brexit needs to be expanded into widespread and representative common ground.

The political parties, social partners and civic stakeholders who are of one mind on this issue across Ireland, Scotland, Wales and England should coalesce and speak with one voice.

A joint civic and political platform opposing Brexit is required.

In the North, local political, business, trade union and other leaders should put a concentrated focus on creating such an alliance to inform public opinion and begin a positive, pro-active campaign highlighting the dangers of Brexit. The Irish Government and civic stakeholders all over Ireland need to be similarly engaged.

An effectively mobilised axis of popular opinion against Brexit – particularly in the North of Ireland, Scotland and Wales – could have a very decisive influence on the outcome of a British referendum.

A failure to act collectively and speak with one voice with maximum resolve against Brexit in the coming months, however, exposes the potential for economic recovery and the peace and political processes in Ireland to far-reaching jeopardy and threat.

David Cameron’s current negotiations with the European Council are not about making the EU work better or enhancing the rights and protections of citizens in the North of Ireland, Scotland, Wales or England.

Brexit is central to the strategy of this new generation of Tories in government to reshape the British state and create a controlling hegemony for the Conservative Party.

Its implications are the antithesis of democracy, human rights, a fair recovery, solidarity and a social Europe. That is why it needs to be vigorously opposed.