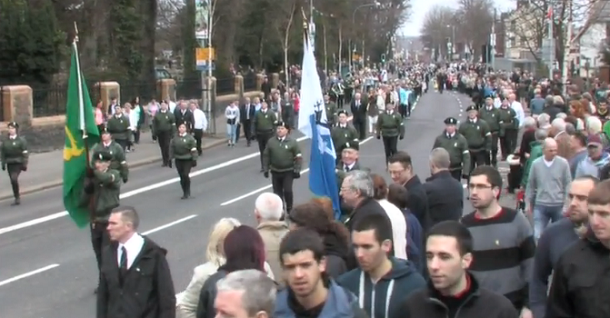 THOUSANDS of people turned out on the streets of Belfast for the annual Easter Rising Parade on Sunday.

The parade marched to the Republican Plot at Milltown Cemetery where Gerry Kelly MLA addressed the crowd and delivered the following speech:

"Easter week 1916 inspired generations of Irish Republicans but also peoples throughout the world who rose up against the tyranny of colonial rule, imperialism and oppression.  It is a fire still burning bright in the heart of every Irish republican today.

"I want to welcome you all here, especially the families of our fallen comrades who suffered so much personal loss and grief in our long struggle.

"I also want to pay tribute to the bravery, leadership and commitment of the IRA in this generation who fought in the streets of our towns and in the highways, byways and fields of our countryside.

"If courage was the measure of success then Ireland would have had her freedom long ago.  Volunteers in the IRA knew that military action alone could not win freedom.  They knew that our opponents and enemies had to be faced up to in every sphere of life.

"This was done in the civil rights movement fighting discrimination and unemployment; in learning and fighting to protect the Irish language and our culture; in  creating jobs and building communities, or as a last resort – taking up arms.

"Armed struggle is not a philosophy or ideology in itself.  It must be a decision of last resort in the absence of any other avenue to achieve Justice, Equality and Freedom. It has to be understood and supported by the community seeking its freedom.

"What can be said of those Volunteers who paid the supreme sacrifice? They were ordinary people with family and friends who they loved and who loved them. What bonded them together was a profound love of Ireland and its people.

"What made these ordinary men and women extraordinary was their vision of a new Ireland based on freedom and equality. They forfeited their own lives and liberty for that vision so that others could live in freedom. They led from the front and because of this willingness to lead we lost some of our best leaders.

"There are turning points in every nation’s history. The 1916 Easter Rising had a global effect which has inspired freedom-loving people around the world for almost 100 years.

"There have been other key events in our recent history such as the popular uprising of 1969 against the Orange state, the terrible events of Bloody Sunday in 1972 and the Hunger Strikes of 1981. The IRA cessation of military activity in 1994 followed by the Good Friday Agreement of ‘98 and the IRA statement of 2005 that the war was over were, I believe, also watersheds. All of them became milestones on the long road to achieve a United Ireland.

"Yet, there is no miracle in a United Ireland. We have to prepare for it and indeed that is exactly what we have been doing. We are in power in the Assembly in the North and we are the main opposition and only credible alternative to the present failed government in the South.

"Partition created two conservative states on this island. Both are the antithesis of the Republican principles of Wolfe Tone and the 1916 leaders. Their vision, Sinn Féin’s vision, of a genuine republic governed in the interests of all its citizens, is shared by an ever-growing number of people.

"Today, people across the island are suffering. Hundreds of thousands are struggling to make ends meet and young people are emigrating in droves. This is a direct result of the unjust austerity policies of both Fianna Fáil and their successors in Fine Gael and Labour – mirror images of the British Tories. These parties are imposing eye-watering cuts to public services and working wages, while safeguarding their pals, the bankers and the wealthy.

"These words are as relevant today as they were then.  It is working-class people who are hit hardest by job losses on a daily basis.

"Austerity is anti-republican, anti-people and anti- equality. But Sinn Féin is leading the political fight back against austerity and cuts.

"The magnitude of those Tory cuts is putting real pressure on public services, on school budgets, on health and the community sector.

"North and South we opposed water charges. In the South we opposed the property tax on ordinary households. Sinn Féin put forward alternative budgets to deliver prosperity and equality and grow employment. They were rejected by the other political parties.

"It doesn’t make sense to split an island nation of 6.4 million people into two separate competing economies. There is no question that as a nation we are stronger together than apart. We would be better off economically, socially and politically.

"More importantly, in a United Ireland we have the power to deliver hope over fear, opportunity over despair. We can carve out a new future together.

"Sinn Féin is different from other political parties and is proud of that fact. Sinn Féin is a party born in struggle with our membership and elected representatives coming from the communities most under pressure from the deep economic crises North and South.  That connection with our community is the bedrock of our politics.

"The mandate Sinn Féin is seeking in the upcoming Westminster election is for equality and against austerity. We want the economic levers to create and sustain growth. The Tories and some of the local parties however, are seeking to continue with austerity policies, which will cut our public services, destroy the welfare state and force citizens into deeper hardship.

"This will be the battlefield in the time ahead. So let me spell it out clearly: Equality is a red line issue for Sinn Féin. We will not move back from it.

"We seek an inclusive united Ireland and Unionists should be assured that Republicans are totally committed to Equality and opposed to all forms of discrimination.  That is equality for everybody.  That requires increased dialogue and engagement. It means setting aside assumptions about unionists and listening to what they have to say.

"It also means, all of us accepting that we are part of an intercultural society and that there are many different minority voices we must listen to within it.

"There is responsibility too on all of us to work towards reconciliation. The British government needs to acknowledge its role as a protagonist in the conflict and the reality of more than a thousand deaths through collusion and British state violence when dealing with the important issue of victims.  There has to be equality of treatment for all victims and survivors whether it is from state violence and collusion or from any of the other combatant forces.

"That is the basis upon which I and other members of Sinn Féin discussed the difficult issues of our collective past. We believe, through the Stormont House Agreement, we have achieved the architecture to deal with the issues of truth and justice with equality at its core. Sinn Féin will continue to stand with the victims in their campaign for the truth from whatever section of the community they come from.

"100 years ago, the leaders of the Easter Uprising were already preparing for 1916. We are now preparing to celebrate the centenary. Some elements in the media and some of our political opponents have sought to criminalise our struggle and our party. They have always and will always fail.

"So on a personal note, I think I can speak for many thousands of Irish Republicans who came through the conflict when I say that we are proud of our time as  Volunteers in the Irish Republican Army.  We are also proud to have been Political Prisoners.

"I am equally honoured, as a political activist, to have been involved in peace and political negotiations and to be one of the many Sinn Féin members to be elected to represent our people.

"There are small groupings within the Nationalist community opposed to the peace process and opposed to Sinn Féin. These groups have every right to disagree with our strategy and we have sought to engage with them on this.

"But they have no right to carry out armed actions, the vast majority of which are directed against unarmed civilians, in the name of Irish Republicanism. These small groups are not the IRA. The IRA fought a war against State combatant forces and fought it to a conclusion.

"The women and men we are remembering here today were not war mongers. They were proud Republican Volunteers who took up arms against a massive military machine when there was no other option. Today as a result of the efforts of these republicans there is a peaceful and democratic path to a united Ireland.

"Now, I don’t know 99 years after the death of our 1916 martyrs what they might have said standing in my place today – apart of course from the legacy of their written words. The Proclamation which was read out on the steps of the GPO has stood the test of time in its relevance.

"I can’t be sure what my friends and comrades who gave their lives in the latest phase of our long struggle might say either.

"But, I do know, that those who survived them took up their mantle.

"Our duty, our commitment to them, is to do the best we can in the times we live in now.

"That is the onerous task our fallen comrades leave us.

"Irish politics is undergoing its biggest shake-up since partition. We are at the core of that change.

"There is much work to do.  But we are in the countdown to a united Ireland.  We believe that together we can make huge progress and truly transform society throughout Ireland.

"Sinn Féin now has 5 Ministers, 5 MPs, 4 MEPs, 29 MLAs, 14 TDs, 3 Senators and hundreds of councillors.  It is the largest political party on the island of Ireland with half a million votes last year. Sinn Féin is the main opposition party in Leinster House and is in government in the North.

"We are the fastest growing movement in Ireland.  The Sinn Féin message of equality, justice and Irish unity is being heard loud and clear right across the island.

"We are closer to our goal of a free independent, and united Ireland than ever before.

"We remain guided by the noble ideals of the 1916 leaders, but we struggle in the context of 2015.  We are now in a phase of nation building.  What Connolly called “the re-conquest of Ireland by the Irish people”. That requires building the political clout to bring about fundamental change.

"Let us send out this political message. Not only have we not gone away but we are getting stronger by the day.

"I came away from our recent Ard Fheis in Derry knowing that our future is in good hands, after listening to a volume of young activists speaking with great clarity, dedication and enthusiasm. One of our greatest strengths as a party is in our mix of generations.

"Allow me to finish by repeating that comment to all those standing at the final resting place of our fallen comrades and friends in Milltown cemetery or where ever they may be.

"James Connolly, speaking at Wolfe Tone’s graveside, said: ‘We who hold his principles believe that any movement which would successfully grapple with the problem of national freedom must draw it’s inspiration, not from the moulding records of the past, but from the glowing hopes of the living present, the vast possibilities of the mighty future,’

"A Chairde agus a Chomrádaithe, We are the living present.  The young republicans standing about us here today are the mighty future!