Put yourselves in the shoes of others 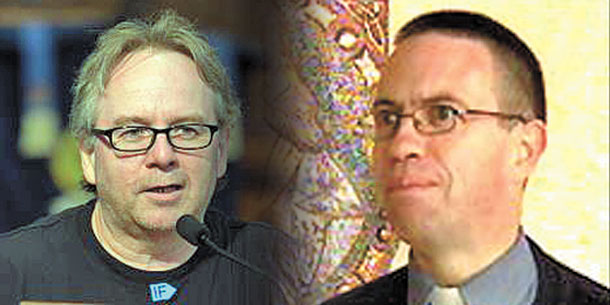 • Rev Steve Stockman is Minister of Fitzroy Presbyterian Church, Belfast, and Fr Martin J Magill is parish priest of Sacred Heart Parish, Belfast. They are also the co-founders of the Four Corners Festival.

An American student, when asked what he learned from studying Northern Ireland’s peace process, said: “When you use violence the healing is so much messier and takes so much longer.”

WE WERE BOTH brought up during ‘The Troubles’. We heard day after day about the suffering of our fellow human beings, both Irish and British. Since we decided to follow Jesus of Nazareth we’ve been encouraged and inspired to be peacemakers. We see no other option.

Jesus said that peacemakers were blessed. On other occasions he said the uncomfortable “Love your enemies”, which was no ‘nice sentimental thing’. This was a call to revolution and a radical way of living, requiring courage and transcendent help which we call grace.

The Gospel of Christ is a call to uncomfortable and costly living for a better world. As followers of Jesus, we had to apply his words to every area of our lives.

We have both engaged with Sinn Féin. We were both present when Declan Kearney, along with John Kyle from the Progressive Unionist Party, were at the Clonard/Fitzroy Fellowship. We attended the conference ‘A City Of Equals in an Island of Equals’ and we have enjoyed the times spent with Máirtín Ó Muilleoir in his amazing year as Belfast City Mayor and his efforts to be a peacemaker. 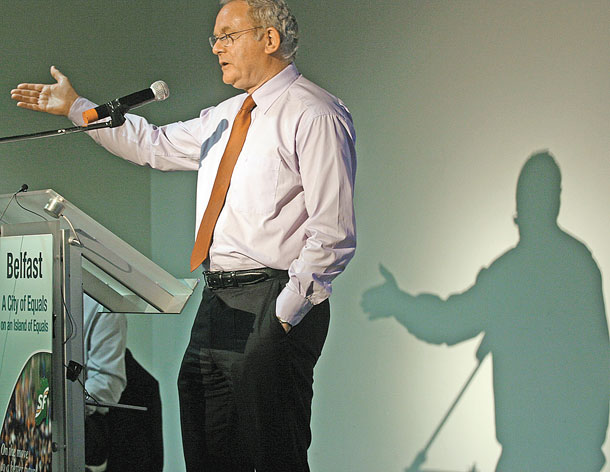 • Martin McGuinness speaks at the ‘City Of Equals’ conference

Sinn Féin have declared they are serious about building the peace; we acknowledge the difficult conversations and decisions which Sinn Féin has taken and which have contributed to a new Northern Ireland/Ireland.

When someone seeks to peace build across communities they become in a way ‘an apologist’ for each community which involves profound listening and risk taking. As two people who want to make peace, we seek words and, more importantly, tangible proof that will help us to convince our communities to rethink their caricature and stereotypes. We always dread those words and actions that have our communities telling us, ‘We told you so.’  In our communities and other communities we often hear how Sinn Féin politicians are very articulate and well-thought-through. We also hear a strong party line or effective soundbite but wonder about the substance behind it. We want to be talked to and not talked at. We want to be listened to and not given well-rehearsed and thought through answers. We want to struggle with you and anyone else who wants to be peacemakers. We don’t want to hear that you invited a Catholic priest and a Presbyterian minister to write in An Phoblacht. We want to know you read the article and paid attention to it. We want substance of soul.

One well-thought-through party line is how ‘there was no other way in 1969’ than the violent campaign. We’ve heard regrets that people suffered but never a real questioning of whether it was wrong. The united front of the party line on this answer becomes tiresome and we as Christians, particularly with an example like Martin Luther King Jr in the same decade, would suggest that there was indeed another way.

An American student, when asked what he learned from studying Northern Ireland’s peace process, said: “When you use violence the healing is so much messier and takes so much longer.”

At the ‘City Of Equals’ conference, Martin McGuinness suggested that Sinn Féin is moving faster than your unionist counterparts in the journey of reconciliation. It is very difficult for people who naturally desire truth and justice for the deaths of their loved ones to struggle to trust or share the future with those who received amnesty. This is exactly what that American student was saying. We as clergy will continue to preach how the grace and forgiveness of Jesus comes into play here but this is a long process and it might take a generation of gentle sensitivity before we pick up momentum. Sinn Féin needs to show patience, humility and understanding.

We dare to ask that when Sinn Féin sits down to think through their policies and actions that they do not only consider what the response of their own supporters will be but that they also put themselves in the shoes of the peacemakers and the other communities and ask how will this contribute to a shared future and how this will promote an equal city on an equal island. The naming of a park after an IRA Volunteer might find support in the former but will certainly not help in the building of a shared future with the latter.

If ‘A City of Equals on an Island of Equals’ is to have impact behind a clever title then it is these uncomfortable questions that will need to be asked if Sinn Féin is to prove the seriousness of generosity and reconciliation.