Video – 'Jail the Bankers' protest at Central Bank in Dublin 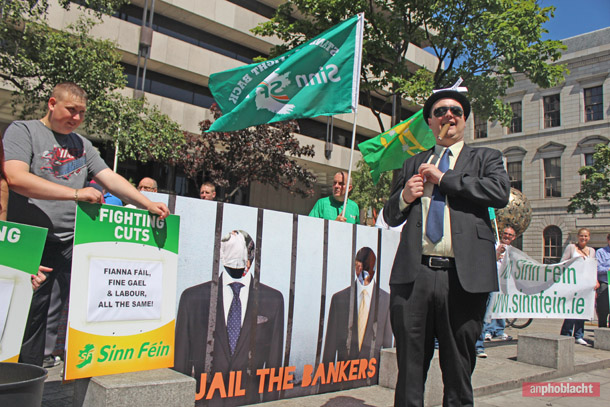 Criminal act? A 'senior banker' laughs off demands that he be arrested

How much did those in government over the past five years know about the tapes?

PROTESTERS at the Central Bank in Dublin on Saturday demanded that senior bankers from bailed-out Anglo Irish Bank face an inquiry and criminal charges where appropriate.

Speaking at the event, Sinn Féin's Daithí Doolan said the public had a right to know just how much those in Government over the last five years – Fianna Fáil, Fine Gael, Labour and the Green Party – knew about the tapes.

"They have become a coalition of parties who are protecting the bankers," he said.

Doolan said Alan Dukes – the Anglo Public Interest Director and former Fine Gael leader – "sat on his hands" despite being aware of the recordings.

Doolan told An Phoblacht there is a growing demand among the public that senior bankers face the full rigour of the law.