Plaque unveiled in Dublin in memory of International Brigades volunteers 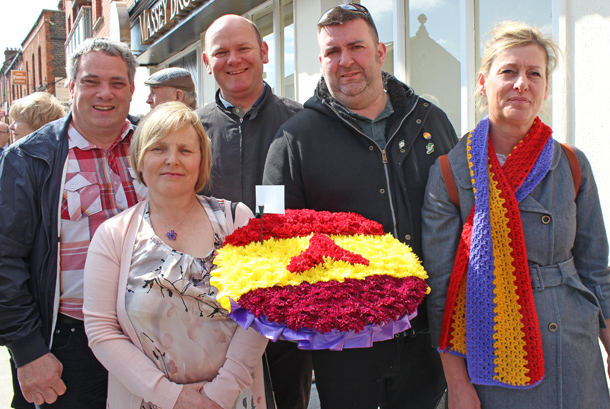 OVER 150 people turned up to the unveiling of a plaque on Emmet Road in Dublin's Inchicore district on Saturday dedicated to six local men who went to Spain to defend the Spanish Government against fascist dictator Franco's military coup. The event was organised by Inchicore Friends of the International Brigades.

Three of the six men – Tony Fox, Mick May and Bill McGregor – die 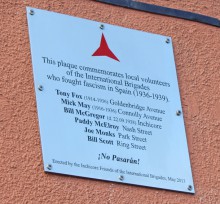 d fighting in Spain. Both Fox and May were members of the IRA's Dublin Brigade while McGregor was a member of the Communist Party of Ireland (CPI).

The other three men – Joe Monks, Paddy McElroy and Bill Scott – survived the war. Monks went on to be active with the Republican Congress before emigrating to Britain, where he died in 1988. McElroy was involved in a hold-up in Amiens Street in 1943. After this he disappeared from the historical record. Scott, who was seriously wounded in the leg, continued as an active trade unionist and CPI member until his death in 1980.

Organisers said they hoped that young people walking by the plaque would question why these six local men left Ireland to fight, and in three cases give their lives, in Spain.

Speaking at the event, local Sinn Féin TD Aengus Ó Snodaigh said while the Irish Government was debating a Bill to deal with Irish Defence Forces deserters who fought with the Allies against Nazi Germany, it must also look to honour the legacy of those men who had to sneak out of the country to help defend the Spanish people against Franco.

He also warned republicans, socialists and others on the Left not to become complacent regarding the rise of right-wing groups, to be vigilant and confront fascist, racist and discriminatory attitudes in their communities.

Also speaking at the event was Eugene McCartan, General Secretary of the Communist Party of Ireland, and Manus O'Riordan, son of International Brigades volunteer the late Michael O'Riordan.

Families of the volunteers laid wreaths.