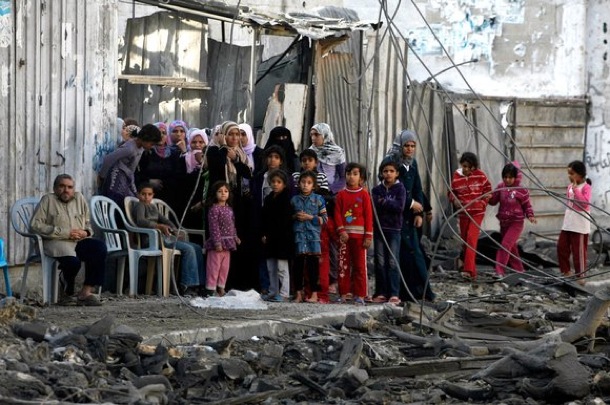 'The goal of the operation is to send Gaza back to the Middle Ages . . . destroying all the infrastructure, including roads and water.' – Eli Yishai, Deputy Prime Minister of Israel

“There are no innocents in Gaza. Don’t let any diplomats who want to look good in the world endanger your lives. At the tiniest concern for your lives, mow them down! There are no righteous men [in Gaza], turn it into rubble! Paint it red!”

“Death, destruction, trauma and terror are being rained upon our people before the eyes of the world. The international community must act to bring an end to Israel’s illegal policies and practices against the Palestinian people.”

“We need to flatten entire neighborhoods in Gaza. Flatten all of Gaza. The Americans didn’t stop with Hiroshima – the Japanese weren’t surrendering fast enough, so they hit Nagasaki, too. To prevent harm to innocent civilians in Gaza will ultimately lead to harming the truly innocent: the residents of southern Israel. The residents of Gaza are not innocent, they elected Hamas. The Gazans aren’t hostages; they chose this freely, and must live with the consequences.”

“If the EU is really serious about creating a peace deal for the region it has to place significant pressure on Israel to enter into negotiations, with the aim of establishing a two-state solution to end the conflict. The current actions of the EU are not only allowing Israel to continue its human rights abuses but increasingly reducing the prospects that a two-state solution to the conflict will ever be achieved.”

“Those who associate Islam with terrorism close their eyes in the face of mass killing of Muslims, turn their heads from the massacre of children in Gaza. For this reason, I say that Israel is a terrorist state, and its acts are terrorist acts.”

“When Israel, in the occupied territories now, claim that they have to defend themselves, they are defending themselves in the sense that any military occupier has to defend itself against the population that they’re crushing.”