Sinn Féin jobs plan and how to pay for it 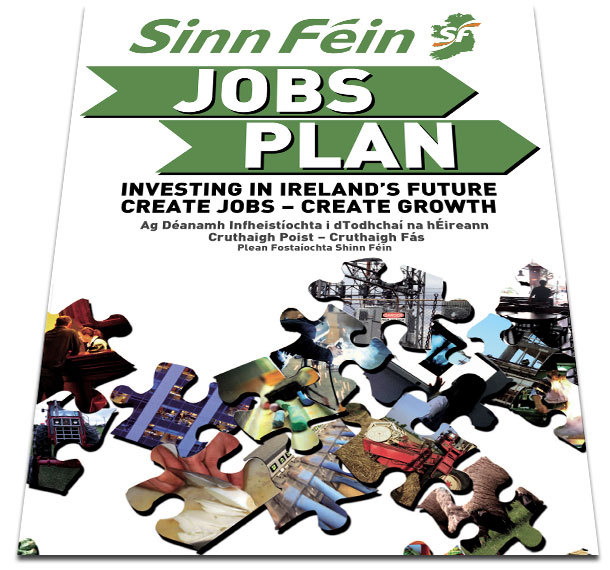 Speaking at the launch in October of the plan, titled ‘Investing in Ireland’s Future: Create Jobs, Create Growth’, Sinn Féin President Gerry Adams TD said the plan is full costed and he outlined a socially responsible way to reduce the Budget and create jobs.

“It is a thoughtful, rational, well-developed and costed plan that will use the available resources in an intelligent, smart way,” the Louth deputy said. “There will be those who disagree with our proposals. That’s fine. Let them do so constructively and provide their alternative.”

What is Sinn Féin proposing?

Sinn Féin is proposing a €13billion investment in a job-creation and economic growth strategy over four years.

The strategy would involve investing in infrastructure, helping entrepreneurs by removing barriers and supporting them to create and retain new jobs and also exploit  the potential of existing state enterprises in the areas of broadband roll-out, renewable energy and eco-tourism, along with investment in agri-food and rural communities.

Where would we get the money?

Sinn Féin’s plan would be funded from the €5.8billion in the National Pension Reserve Fund, €1.534billion from the European Investment Bank and €3billion incentivised investment from the private pension sector. The party says it would not cut the €2.6billion from the capital budget spend as the Government plans to.

What will Sinn Féin invest in?

How will Sinn Féin support business?

What about state enterprises?

Coillte: Develop Coillte’s role in eco-tourism across its 10 forest parks and 150 recreation sites

Renewable energy: Invest €1billion in wind and wave energy. It is estimated this area could create 50,000 jobs over 15 years. This must be done in a community-friendly fashion

Broadband: Ensure the ESB, Bord Gáis and Coillte co-operate in the roll-out of broadband