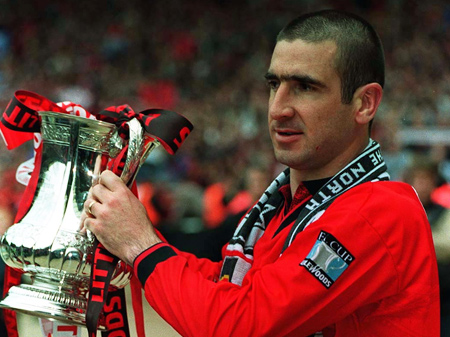 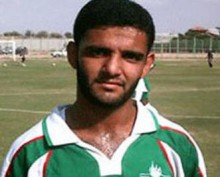 MANCHESTER UNITED legend Eric Cantona, FIFA President Sepp Blatter, UEFA President Michel Platini, Wind That Shakes the Barley director Ken Loach and Noam Chomsky are among a number of international figures who have joined calls for Israel to release Palestinian footballer Mahmoud Sarsak (above right), who is on hunger strike and close to death.

Mahmoud, a player with the Palestine national soccer team, has been almost 90 days on hunger strike in protest at his imprisonment without charge or trial.

25-year-old Mahmoud Sarsak, a member of the Palestine national team, is taking nutrients at the insistence of his lawyer ahead of a judicial review on Thursday.

Mahmoud was arrested by Israeli forces while travelling from his home in Gaza to play a match with his team on 22 July 2009 in the West Bank.

Mahmoud's family say that he was interrogated for 30 days before being imprisoned. At the time, Israeli authorities claimed he was an “unlawful combatant” but he has been imprisoned for the past three years no formal charges being laid against him or brought to trial to answer the allegations.

The International Federation of Professional Footballers (FIFPro) has called for the immediate release of Sarsak. The Federation – which represents 50,000 professional players from across the globe, including those from some of the largest leagues in the world such as France, England, Italy, Spain, Brazil and Ireland – says it is “deeply concerned” by the situation. Philippe Piat, FIFPro’s Vice-President, says:

“Sarsak is not the only player who is suffering from the actions of the Israeli Government. There are stories of other players who have been harassed, arrested or even killed.

“The freedom of movement is a fundamental right of every citizen. It is also written down in the FIFA regulations that players must be allowed to play for the national team of their country. For some footballers it is impossible to defend the colours of their country. They cannot cross the border. They cannot visit their family. They are locked up. This is an injustice.”

Reports from inside Palestine suggest that Mahmoud's health is deteriorating rapidly and that he has lost his sight. A physician who visited him in hospital last week said he was suffering from extreme loss of muscle tissue, drastic weight loss, loss of consciousness and was in danger of pulse disruptions which could kill him.

Two other hunger striking prisoners are also said to be in a critical condition.

The Electronic Intifada blog reports that Israel is scheduled to host the UEFA Under-21s competition in 2013. More than 40 Gazan football clubs wrote a letter to UEFA President Michel Platini over a year ago to protest this. They have received no reply.