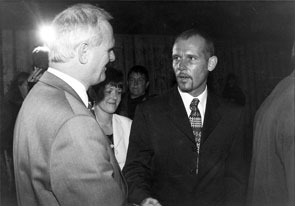 DUP MP for South Antrim Willie McCrea has been challenged to set out in detail the extent and nature of his relationship with the notorious leader of a loyalist murder gang.
The call by Sinn Féin MLA Mitchel McLaughlin call comes after it was revealed at the Wright Inquiry this week that McCrea held meetings with the then UVF leader in 1991 and 1992 at the height of Wright’s sectarian murder campaign in Mid-Ulster.
The Wright inquiry is investigating whether there was any form of collusion by state agencies in the killing of the founder of the Loyalist Volunteer Force (LVF) a breakaway from the UVF.
During the period that McCrea was MP for Mid-Ulster, Billy Wright’s UVF death squad was involved in the sickening sectarian murders in 1991 at a mobile shop in Craigavon of 16-year-old Catriona Rennie, 19-year-old Eileen Duffy and local man Brian Frizzell as well as the murders of 63-year-old Charlie Fox and his wife Teresa at their home near Moy, County Armagh in 1992.
On Monday at a hearing of the Inquiry in Banbridge, McCrea claimed that just weeks before Billy Wright was killed at Long Kesh by the INLA, he had been tipped off by an anonymous source that both he and Wright would be targeted.
Challenging the DUP man to clarify the nature of his relationship with Wright, also known as ‘King Rat’, Sinn Féin South Antrim MLA Mitchel McLaughlin said:
“At the height of the Drumcree crisis and following the murder of Catholic taxi driver, Michael McGoldrick, Wright was expelled from the UVF and went on to form the LVF. Shortly after his expulsion from the UVF Willie McCrea very publicly appeared alongside him at a support rally in Portadown. At that time Mr McCrea claimed that his actions were merely showing support for someone living under threat”.
“It has now emerged at the Billy Wright inquiry that far from being the first encounter between Billy Wright and Willie McCrea, the MP was actually holding meetings with the then UVF leader in 1991 and 1992. This despite Wright making little effort to disguise his role as a loyalist murder gang leader in Mr McCrea’s then constituency of Mid-Ulster. Mr McCrea needs to explain these revelations considering that Billy Wright was directing a murder campaign against Catholic constituents of Mid-Ulster while Willie McCrea was their constituency MP.
“This revelation will cause deep anger amongst the victims of Billy Wright’s murder squad. At best McCrea is guilty of gross hypocrisy. Willie McCrea now must set out in detail the extent and nature of his relationship with Wright and what he knew, if anything, about Mr Wright’s activities during this period’, McLaughlin said.

• SICKENING: McCrea was Mid Ulster MP when Wright's gang murdered two teenage girls and a man in Craigavon in 1991