UDA fights on, 'for drugs and Ulster' 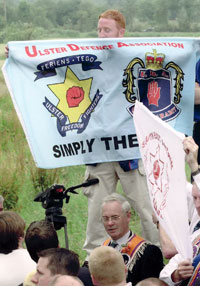 THE North’s Social Develoment Minister, Margaret Ritchie, announced in Stormont on Tuesday (16 October) that she is blocking £1.2m Conflict Resolution Initiative (CTI) money from going to the UDA.
While promising to direct the money into other projects in loyalist areas, Ritchie nonetheless stuck to her position that the money promised to the UDA by Peter Hain in March of this year would not go through the loyalist paramilitary goup.
Ritchie went ahead with her statement in face of press reports saying she did not have the legal powers to withdraw the funding.
That civil servants may have given her questionable legal advice is a secondary issue for the SDLP minister to deal with.
In wake of the latest bout of UDA in-fighting, which erupted in Carrickfergus, County Antrim, over the weekend, it was no surprise the Social Development Minister maintained her hardline position.
It was public knowledge that Ritchie was poised to announce her decision on the money to the Assembly on Tuesday, yet the UDA brought gangs, up to 100 strong, onto the streets of Carrickfergus where they fought pitched battles.
As a result, five men from the town appeared in a Belfast court on charges ranging from attempted murder to the possession of drugs on Monday 15 October.
Daniel Millar, Philip Aiken, Darren Duff, Barry Waite and George Clarke, all from Carrickfergus, were charged with a variety of offences that included the attempted murder of Thompson Gilmore of the Ulster Political Research Group, the political representatives of the UDA, in the early hours of Saturday morning, 13 October.
The UDA feud centres on the dispute between the breakaway South-East Antrim Brigade of the UDA and the so-called mainstream UDA but has served to highlight the tension that exists within unionist paramilitaries and its place in the unionist body politic.
The UDA, as with all unionist paramilitary groupings, presents itself as a politically driven organisation. Yet its history is one of bloody sectarian murder that has degenerated into a quagmire of criminality and drug dealing.
This criminal mentality was highlighted just last month after two former UDA ‘brigadiers’ from North Belfast – Andre Shoukri and William Boreland – pleaded guilty to a string of charges of extortion, blackmail and intimidation.
And as the UDA in-fighting convulses the East Antrim area, extending from Carrickfergus to Larne – where Catholics now avoid the town centre out of fear of the roaming UDA gangs – unionist politicians have been found wanting.
Indeed, the ambiguity with which both unionist politicians and British NIO ministers view loyalist killer gangs has also been underlined by recent events.
When, on August 10, Margaret Ritchie set a 60-day deadline for the UDA to disarm or lose the CTI grant for projects in loyalist areas, she seemed to be holding all the aces.
Certainly ordinary nationalists, aghast that Peter Hain had promised the money in the first place, supported Ritchie. Ordinary unionists, who for years lived with UDA criminality and feuding, also backed her stance. But as the 9 October cut-off date came and went, it was clear that neither the main unionist parties nor the British Government were willing to stand by Ritchie and reinforce her ultimatum.
It has been reported that Hain’s replacement in the NIO driving seat, Shaun Woodward, has been briefing people against Ritchie and he raised the red herring that the UDA is on the verge of decommissioning, so it should be left to its own timescale.
As for Paul Goggins, the NIO Security Minister, he has simply taken the view that it is up to the Assembly – or to be more precise, Margaret Ritchie – to sort the problem out.
That these NIO ministers, the representatives of the British government in the Six Counties, should take such a soft approach to the UDA is, of course, no surprise given that the main unionist parties have, to all intents and purposes, turned their backs on the issue. Rather than demand the UDA give up its weaponry, as they demanded of the IRA after the signing of the Good Friday Agreement, the unionists have remained curiously muted. Indeed, it could almost be said that the unionist parties have come down on the side of the UDA.
MLA David McNarry, the UUP chief whip at Stormont, warned Ritchie she will not “escape accountability for the likely unravelling of discipline in loyalist quarters” if she axes funding for the CTI project. McNarry went on to encourage Ritchie to place her demand for UDA decommissioning “on a separate agenda”.
Despite the lack of political backing from the British and the unionist parties, Ritchie stopped the CTI funding. Her stance will not force the UDA to decommission or to disband but what it has done is expose the ambiguous relationship that unionist paramilitary gangs enjoy with unionist politicians and the British Government.