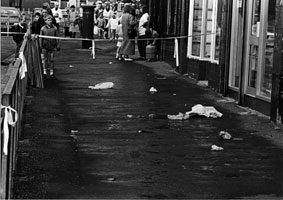 The scene of the killing of Patrick McKenna

UVF killer Brian Robinson and his Catholic victim Patrick McKenna “were sacrificed to make the British security forces look good,” according to a senior UVF source. The information confirms the suspicions of Patrick McKenna’s family, who believe collusion between unionist paramilitaries and the British Government played a role in the killing. Patrick McKenna (43) was shot dead as he walked along the Crumlin Road on 2 September 1989.
The source claimed that up to three British agents working within the UVF had prior knowledge of the gang’s intention to carry out a sectarian murder, but the decision was taken by their British handlers not to stop the killing. He named the three agents as Trevor King and Colin Craig, both shot dead in June 1994, and a third man described as the most senior UVF figure in the North.
According to the source, British fears that their systematic collusion with unionist paramilitaries had become too obvious prompted a decision to set up a sectarian killing and subsequent execution of the UVF killers by a covert unit within the British army.
“The [British] army was shooting IRA men dead all over the place, so they had to be seen to target loyalists as well. The decision was made to take out Brian Robinson and Davy McCullough. King and his boss would have known about it,” said the source.
According to the source, just hours before the McKenna murder, Robinson and McCullough were told they would be carrying out the attack on a motorcycle instead of using a car.
“The lads were surprised by this but went along with it. I  am in no doubt now that the vehicle was changed to make it easier for the [British] army to kill Brian and Davy,” said the source.
Brian Robinson was shot first in the back, then in the wrist and finally twice in the head. According to civilian witnesses the soldier had stood over the injured UVF man before firing more shots as Robinson lay on the ground. A pathologist testified the fatal shots had been fired at close range, confirming the witness statements.
At the coalface of the British Government’s collusion strategy was the covert British army unit, the FRU. The FRU’s direct involvement in killings left it the most exposed within the British collusion strategy.
It isn’t clear who made the decision to cover FRU tracks by ordering an operation involving the targeting of a random Catholic victim and subsequent execution of the killer by the FRU. It may have been the FRU or their political masters in MI5.
Patrick McKenna was shot 11 times by the UVF just a short distance from his home. The gunmen opened fire from a motorcycle at close range. One of the attackers, Brian Robinson, was shot dead minutes later by an undercover British army unit. The second UVF gunman, Davy McCullough, was injured in the ambush, arrested at the scene and subsequently convicted.
Robinson was shot dead by a female member of the FRU, known as the Angel of Death and believed to be Margaret Walshall. Walshall, a close associate of the head of FRU, Gordon Kerr, was known as ‘Captain M’. She was a key player in the collusion strategy and as Brian Nelson’s first handler would have played a significant role in the reorganisation and rearming of unionist paramilitaries.