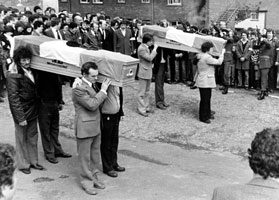 December 1984 witnessed the deaths in action of four IRA Volunteers from Derry. Three of those deaths were summary executions carried out by Britain's undercover SAS regiment, providing further evidence of the continuing British shoot-to-kill policy in the Six Counties.

On Sunday 2 December 1984 IRA Volunteers Antoine Mac Giolla Bhríghde, from Magherafelt, County Derry and Ciarán Fleming, who had broken out of Long Kesh prison in the Great Escape of 1983, were preparing to mount an operation against crown forces near Drumrush in County Fermanagh when Mac Giolla Bhríghde saw a car parked on the lane which he believed to contain civilians. Approaching the car to tell the occupants to leave the area, undercover SAS members opened fire, hitting him in the side. Cuffed with plastic stays, Mac Giolla Bhríghde was tortured before being summarily executed. His comrades, when later debriefed, reported hearing a single shot, then screaming, and a short time later a further burst of machine gun fire, after which the screaming stopped.

On hearing the initial gunfire, IRA Volunteers rushed to the scene and immediately engaged the SAS, killing one soldier and wounding two others. Under heavy fire, the IRA Active Service Unit retreated across the swollen River Bannagh, where sadly, Ciarán Fleming, a non-swimmer, was swept away and drowned.

On Thursday, 6 December 1984 IRA Volunteers Danny Doherty from the Creggan Estate and Willie Fleming from the Top of the Hill area of the Waterside in Derry City were driving on a motorbike on active service in Derry. When they entered the grounds of Gransha Hospital, an SAS man drove a car into the motorbike, dislodging Willie from the pillion seat. As he lay on the ground, two further SAS members shot him, first with 9mm pistols, until they ran out of ammunition, and then with HK 53 sub-machine guns. His autopsy showed that he had four gunshot wounds to his head and 56 to his trunk and torso.

When Willie was knocked off the bike it went out of control, mounting a kerb and throwing the already shot Danny to the ground. Two more SAS men then continued to empty their weapons into him. At Danny's inquest, the coroner stated that Danny had three gunshot wounds to the head and 21 to the trunk. Danny and Willie had no chance either to defend themselves or to surrender. Following the shootings, the RUC left the bodies lying where they had fallen for over five hours, before eventually removing them to Altnagelvin Hospital. William Fleming was a cousin of Ciaran Fleming and they died within four days of each other.

All four of the deceased Volunteers were given military funerals. At the funeral of Antoine Mac Giolla Bhríghde, the RUC, wielding batons, tried to remove the Tricolour from the coffin. They insisted on putting Land Rovers in the centre of the cortege and rammed the family car to get behind the hearse. The family then stopped the funeral until the RUC removed themselves from the cortege. After 20 minutes, the RUC pulled out of the cortege and the mourners made their way to St Mary's Church, where Sinn Féin's Gerry Adams delivered the oration.

Ciarán Fleming's body was not found until 21 December. His funeral took place on Christmas Eve and, despite further attacks by the RUC, he was laid to rest by his comrades with military honours.

Willie Fleming's funeral from the Waterside joined up with that of Danny Doherty of Creggan. It was the largest funeral in Derry City since the death of Patsy O'Hara. The coffins were draped with Tricolours and four IRA Volunteers in full uniform fired a volley over the coffins. Over 3,000 people followed the cortege to Derry City Cemetery. In his oration, Sinn Féin's Martin McGuinness said: "We are an occupied country and those brave enough to fight repression deserve nothing but respect and unfailing support from us all. Only the IRA can bring Britain to the negotiating table."

IRA Volunteers Antoine Mac Giolla Bhríghde, Ciaran Fleming, Danny Doherty and Willie Fleming all died fighting for the freedom of Ireland in the first week of December 1984 -- 22 years ago.

• The RUC attacking the funeral of Ciarán Fleming