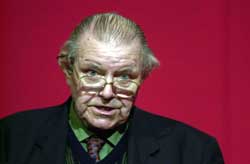 Michael O'Riordan, who died last week aged 88, was synonymous with communism in Ireland. Born in Cork in 1917, just five days after the Bolshevik Revolution in Russia, he outlived that revolution by 15 years.

His parents came from the West Cork Gaeltacht of Béal Átha 'n Ghaorthaidh, and he was deeply steeped in the history of that rebellious place - in struggles against landlordism, English rule and local gombeenism. Ironically, though, it was when he was interned in the Curragh in the 1940s that he learned Irish from fellow republican internee, Máirtín Ó Cadhain.

Michael joined Fianna Éireann in 1933 at the age of 16 and subsequently the IRA in Cork. He was active in the fight against the Blueshirts, was strongly influenced by Frank Ryan, and joined the Communist Party of Ireland in 1936. He responded immediately to Ryan's call for volunteers to defend the Spanish Republic against fascism, was decorated for bravery as a soldier of the Spanish Republic, and was wounded on the Ebro front in 1938 shortly before the International Brigade was withdrawn from Spain.

Back in Ireland he threw himself into local politics working to link republicans and socialists in a common cause. He was interned in the Curragh when war broke out. Released in 1943, he won over 3,000 votes (more than 10% of the vote) in a Cork by-election in 1946, but was then subject to a massive campaign of harassment which drove him out of the city.

He settled in Dublin where he regrouped the small communist forces in the 26 Counties in the Irish Workers' League and then the Irish Workers' Party. It was the time of the Cold War, but O'Riordan never flinched in the fight to uphold the cause of the working class or to defend the Soviet Union, warts and all, against its detractors. In 1970, with the civil rights struggle in full ascendant he helped to reunite the Communist Party on a 32-county basis and became its general secretary.

He passionately believed in James Connolly's dictum that "the working class are the only incorruptible inheritors of the fight for Irish freedom", but equally strongly endorsed the need for the fight for national independence and reunification to be carried to completion. He often quoted a former general secretary of the Communist Party, Seán Murray, who warned anti-nationalist 'socialists' that "you may ignore the national question, but the national question will not ignore you."

Denounced from the pulpit, in times when such a denunciation was listened to, he fought a hard struggle to uphold his cause, though never losing his common touch.

He was a colossus, widely respected throughout the labour movement, and as times changed and people became embarrassed by the obscurantist backwardness of the late 1940s and 1950s, O'Riordan became even more respected in official circles. And Spain, in tribute to his role in the Civil War, made him an honorary citizen of that country.

It was mark of his significance that the national partnership talks on the morning of his funeral were adjourned as mark of respect to allow trade union negotiators to attend.

His lasting legacy is the principle that socialism cannot be built in Ireland unless the people have the national freedom to do so; and that national freedom is worthless if it doesn't give ordinary working people a life free from exploitation and deprivation.

He stood firm on the Ebro in 1938, he stood firm in Dublin in the fifties and sixties, and when Gorbachev tore down the red flag over Moscow in the nineties O'Riordan proudly raised his red banner over Connolly House in Essex Street where it still flies.

He will be remembered with pride.