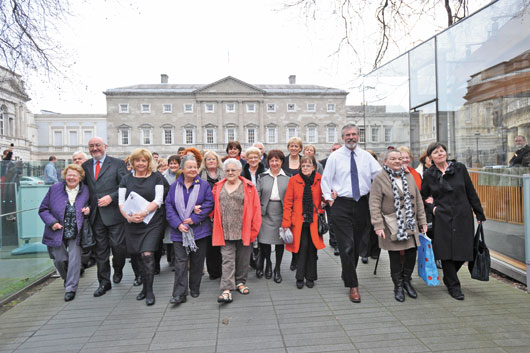 What Survivors of Symphysiotomy are seeking

The setting up of an independent commission of inquiry that is not controlled by vested interests.

Access to the health benefits and entitlements promised by Government in 2003 (many of which were subsequently withdrawn or never granted) to be placed on a statutory basis.

GROWN MEN WEPT in the Dáil as TDs pleaded with the Government to do the decent thing and meet the requests of women who carry the physical and emotional scars of the barbaric practice of symphysiotomy. Symphysiotomy was practised in Irish hospitals from the 1940s to the 1980s.

Many of these women, members of the campaign group Survivors of Symphysiotomy (SOS), were sitting, listening in the public gallery.

The scandal was being debated for the first time ever in parliament after Sinn Féin Health spokesperson Caoimhghín Ó Caoláin TD succeeded in getting the issue on the Dáil schedule on 15 March.

Ireland was the only country in the Western world to practise these 18th century operations in the mid to late 20th century. They were done mainly for religious reasons by obstetricians who were opposed to family planning and also for training and experimental purposes. One baby in ten died.

Caoimhghín Ó Caoláin TD spoke passionately in the Dáil about the cruel practice under the guise of medical care.

“The infliction of symphysiotomy on women in Ireland is one of the greatest medical scandals not only here but on an international scale,” he said.

“Symphysiotomy is a clinical scandal on a par with the clerical scandals we have seen exposed in the past two decades. It may not be on a par in terms of scale but it is certainly equivalent in terms of the suffering inflicted on the women victims and on their families. And there is one very important and crucial parallel – that is the effort by the medical establishment and by Government to conceal the true nature and extent of this abuse of the bodies and of the rights of Irish women. I regret to say that this effort to conceal or deny the truth is continuing.”

In 2003, then Fianna Fáil Health Minister Mícheál Martin ruled out the establishment of a statutory public inquiry into cases of symphysiotomy. He told the Dáil the procedure was only carried out where it was felt there was a danger to the mother from Caesarean section. Fine Gael/Labour Party Health Minister Dr James Reilly has taken a similar stance.

Sinn Féin’s Caoimhghín Ó Caoláin asked Dr Reilly in the Dáil if he agreed that this barbaric act should never have been carried out in the first place. The Health Minister replied: “I reject the deputy’s contention that this was a barbaric act, although its use in certain circumstances may well transpire to have been utterly inappropriate.”

“I challenge him to ask any of the surviving victims if they agree with his contention that sympysiotomy was not barbaric.

“We need a full and proper inquiry that is open and transparent and that gives the victims their proper place.

“We also urge the Government to introduce legislation amending the statute of limitations as was done in the case of sexual abuse victims. This would allow the women to pursue legal action.

“We also need to see a comprehensive package of supports for the surviving victims of symphysiotomy, including health amendment cards for all.” 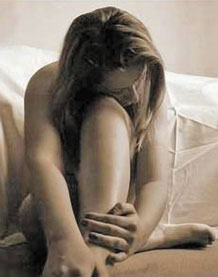 Those who have campaigned on this issue for many years attribute its use by the medical profession to Catholic Church dogma, he said.

“The Catholic Church vehemently opposed birth control methods and the use of Caesarean sections limited the number of children a woman could have. It was generally accepted that the maximum number of these that could be used on a woman was four.

“The use of symphysiotomy was one way of ensuring that women didn’t look to birth control.”

Adams praised the survivors of symphysiotomy as “courageous women”, adding:

“They are elderly and frail citizens who carry the physical and emotional scars of this barbaric practice. Those courageous women who spoken to us have all suffered long-term ill-health and disability as a consequence of what was done to them.”

The Louth TD told of one woman who had called to see him in Drogheda to tell him of her experience.

“Lilly McDonnell was a victim of symphysiotomy 60 years ago. Lilly told me how her child was killed in the course of this procedure and of the physical damage done to her. She showed me the child’s birth certificate.

“Like the other survivors, Lilly lives daily with the harrowing consequences of what was done to her.

“The state should be deeply ashamed of what it allowed to happen to these women, in my view because of the influence of conservative religious fundamentalism.

“It should also be ashamed about its inadequate and at times heartless response to the demands of the victims for redress and truth.

“In their efforts to highlight what was done to them the victims frequently met a wall of disinformation and institutionalised obstruction. Records were destroyed or ‘lost’ and the aftercare they deserve was denied if they could not prove — by the presentation of medical records! — what had been done to them.”

The Sinn Féin leader said the Dáil, the Seanad and the Government have a duty to ensure “that this deep wrong is finally brought to a conclusion and in a way that is acceptable to the victims”. 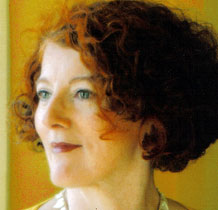 Symphysiotomy is a cruel and dangerous childbirth operation. It unhinges the pelvis, severing the symphysis joint or, in the case of pubiotomy, sundering the pubic bones.

There is a particular issue about its use in Ireland, isn’t there?

Ireland was the only country in the developed world to practise this discarded surgery in the mid to late 20th century.

Around 150 women survive today, many of them permanently disabled, incontinent and in pain. Some lost their babies during the procedure.

So why were they carried out here?

These operations were down to doctors’ preference for symphysiotomy over Caesarean section, which by 1944 was the standard treatment for difficult births. Some women were symphysiotomised under general anaesthetic during pregnancy or to ‘deliver’ a baby already born. But most were left for hours in the labour ward before being operated upon without their knowledge or consent.

After the surgery, mothers were left to labour until the baby came, and to push for as long as it took, through the agony of an unhinged pelvis, to achieve a vaginal birth. Those who could not do so were eventually delivered abdominally by doctors who had earlier denied them a Caesarean section.

A wall of silence surrounded the surgery post-operatively. Hospital midwives neglected to nurse women as surgical patients, forcing them to walk on a broken pelvis. Discharged from hospital without medical advice, women were left to sink or swim.

This was carried out mainly in Catholic hospitals?

The revivalists were driven by a desire to control women’s reproductive health. Caesarean section was associated with what Archbishop McQuaid termed the “crime of birth prevention”. Four such operations were widely seen as the upper safety limit.

Leading Catholic doctors saw symphysiotomy as a gateway to child-bearing without limitation, one that did not lead women into ‘temptation’ - that is, the practice of family planning.

Obstetricians who broke women’s pelvises subsequently advised them that they should have ten children.

Was there no reaction against this?

It was shunned by doctors on account of its dangers but symphysiotomy was revived in 1944 at Holles Street Hospital as a replacement for Caesarean section in certain cases.

Pregnant women were used as guinea pigs there in the 1940s and 1950s and this experimentation continued through the 1960s and 1970s at the Lourdes Hospital, Drogheda. Lourdes was a training hospital founded by the Medical Missionaries of Mary to serve their missionary hospitals overseas. The operation was also carried out for teaching purposes.

Symphysiotomy was seen as invaluable for medical students from overseas, particularly from Africa and India, because it was a low-cost operation that required neither hospital nor electricity.

Regulatory failure allowed the practise of this mutilating surgery for half a century. Hospital reports detailing these operations were ignored. No person or agency has ever been held to account.