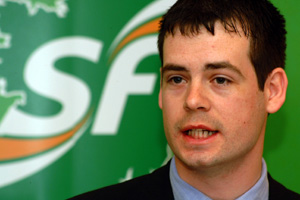 At 26 years of age, Pearse Doherty is not only the youngest Sinn Féin candidate to run in the European Union Parliament elections in June, but the youngest candidate on the whole island overall. Pearse has been making his mark on the political stage for the last few years, and as well as running for Europe, he is also contesting the local elections in Donegal.

A poll last week, which put him at 9% of first preference votes, and another this week that put him at 15%, has certainly put the wind up his Northwestern opponents in the race for an EU seat. Pearse looks set to have an outside shot at a seat and as everybody knows, anything can happen in an election.

An Phoblacht caught up with the young man from Gweedore in Donegal last Monday, to ask him about his EU campaign and the issues he has been confronted with.

"The big issue in terms of the local elections is the high level of unemployment," he said. "In the area I'm running in — the Glenties — the unemployment rate is 25%. Throughout Donegal as a whole, it stands at 16%. It's currently the highest in the country. But the entire West coast hasn't developed along with the rest of the country. For example, in the past the area would have relied heavily on fishing, and that has diminished in recent years. That's where you can see the local issues spilling over into European ones - the EU has obviously had an affect on the fishing industry. There used to be proud fishing villages all along the West coast. Now they're like ghost towns."

According to Pearse, neutrality is another huge concern in the constituency.

"Well the North West had the highest vote against the Nice Treaty when it was put to referendum last year and Donegal had the highest 'No' vote as a county," Pearse told us. "This will be the first time voters will have their say on Europe since the treaty, and we hope they'll come out and vote for us as the viable, actual alternative to what they've been offered up to now."

The Irish language is another issue for Northwestern voters, and it's an issue where Pearse outstrips his rivals. He is a committed Gaeilgeoir and his speech at this year's Stádas march was considered the best of the day. While one of Fianna Fáil's candidates is a strong Irish language activist, as Pearse pointed out, his party hasn't delivered for the people living in the Gaeltacht areas.

"The Northwest contains most of the Gaeltacht region, and it has a very large Irish speaking population, so it is a major issue," Pearse said. "We canvass those areas in Irish, we couldn't have it any other way. People who don't come from Gaeltacht areas don't understand that Irish is the first language for the people who live there. They don't understand the importance of the language. The fact that we are a bilingual party really stands to us. Everything we produce in terms of literature is brought out in both languages. And of course, one of our major campaigns is for Irish to be given official status in the EU."

The fact that Sinn Féin can return an all-Ireland team to Europe is also of huge significance.

"We in Donegal in particular can see the importance of having all-Ireland policies in Europe and obviously at home, because we are surrounded by Derry, Fermanagh and Tyrone, so at times it's like we're completely cut off from the rest of the 26 Counties," Pearse said. "The fact that we have an all-Ireland team running in these elections is huge."

A snapshot of issues in the Northwest is, of course, difficult to provide. The constituency is the largest in the elections, entailing nine counties, spanning over three provinces (Ulster, Munster and Connacht). Unfortunately, as he pointed out himself, Pearse is from the most northern tip of the area, which means a lot of travelling and long hours.

"I have a clock on the car that I reset each Sunday," Pearse informed us. "Today (Monday), I'm already on 1,900 miles. There's an awful lot of travel involved in an average day, which means I often have to start very early. If I'm expected in Galway for 10am, I have to leave Donegal at 6am. And no matter where I am, I always try to get home."

Getting home has become very important for Pearse of late. He plans to get married at the end of the summer. We asked him if he thought he'd be having his honeymoon in Brussels.

"Maybe," he laughed. "We have good expectations in this election. We've set down realistic, achievable targets for each county, in terms of the votes we'll need. We expect big votes from the likes of Cavan, Sligo and Donegal. We need 50,000 to 55,000 first preference votes, and after that we will rely heavily on transfers. We think we can get the transfers. In the last general election, we got 2,800 votes and 3,000 transfers. They were largely from independents, and then Fine Gael. We could shake up the status quo and take a seat."

Our last question for Pearse was whether his running in the EU election had raised the profile of Sinn Féin in Donegal sufficiently for there to be a TD elected there in the next General Election.

"Actually, the Sinn Féin strategy is to elect two TDs in Donegal next time round," Pearse answered. "We were heading in that direction anyway, but the party's momentum, and of course this campaign, means that in 2007 the question won't be whether there'll be someone elected, but how many seats we'll take.